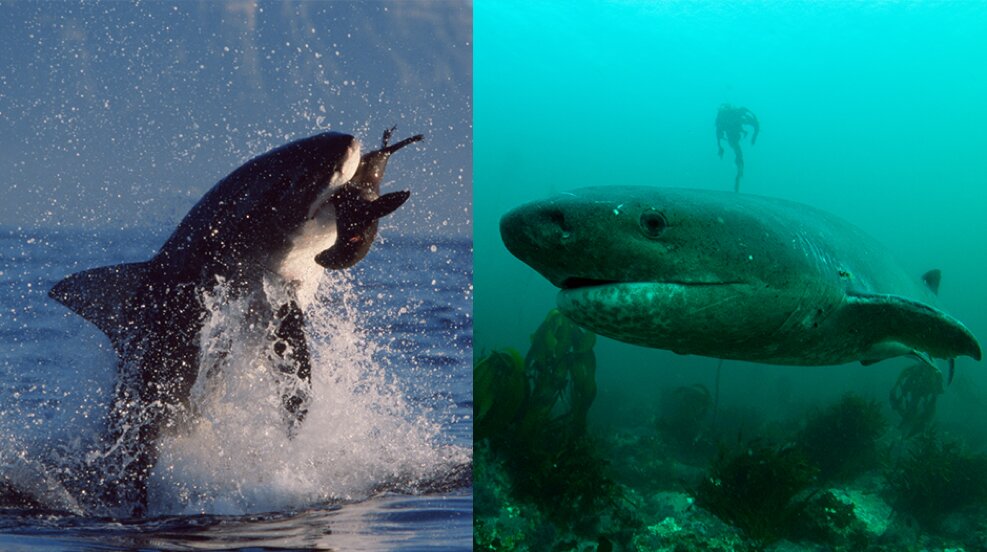 A new study has documented unpredictable consequences after the decline of great white sharks from an area off South Africa. The study found that the disappearance of great whites has led to the emergence of sevengill sharks, a top predator from a different habitat. A living fossil, sevengill sharks closely resembles relatives from the Jurassic period, unique for having seven gills instead of the typical five in most other sharks.

These findings are part of a long-term collaborative study between Shark researcher Neil Hammerschlag from the Rosenstiel School of Marine and Atmospheric Science of the University of Miami (UM) and wildlife naturalist Chris Fallows from Apex Shark Expeditions.

The research focuses on the waters around Seal Island in False Bay, South Africa, and a site well known for its "flying" great white sharks that breaks out of the water when attacking Cape fur seals. Since the year 2000, the research team spent over 8,000 hours observing great whites from boats, during which they recorded 6,333 shark sightings and 8,076 attacks on seals. These data revealed that for more than a decade, great white numbers were relatively stable, but in 2015 the sightings began to drop off steeply.

"In 2017 and 2018, their numbers reached an all-time low, with great whites completely disappearing from our surveys for weeks and months at a time," said study lead author Neil Hammerschlag, research associate professor at UM Rosenstiel School and Abess Center for Ecosystem Science & Policy. "While the reasons for their decline and disappearance remain unknown, it has provided a truly unique opportunity for us to see what happens to an ocean ecosystem following the loss of an apex predator."

"In 18+ years of working at Seal Island, we had never seen sevengill sharks in our surveys," said co-author Chris Fallows. "Following the disappearance of white sharks in 2017, sevengill began to show up for the first time and has been increasing in number ever since."

During periods of great white absence in 2017 and 2018, researchers documented 120 sevengill shark sightings and even witnessed an individual attacking a live seal. In South African waters, sevengill sharks have no equal in the food web with the exception of the great white and orca whale. Historically, the only well-known aggregation site for sevengills in False Bay was located 18 km away from Seal Island within the inshore kelp beds. The study suggests that the appearance of sevengill sharks at Seal Island was due to the disappearance of great whites, allowing sevengills to exploit the area without the risk of predation from the great white sharks or the competition with them for shared prey.

This 18-year study provided new insights into the various ways that a marine ecosystem can be altered following the loss of apex predator.

The study, titled "Disappearance of White Sharks, leads to the emergence of an allopathic apex predator, the sevengill shark," was published in the online journal Scientific Reports on February 13, 2019.

Explore further:
Has Sharks been beaten by killer whales off Cape Town's coast?