Termites have built hundreds of millions of large mounds for 4,000 years – and now scientists know why 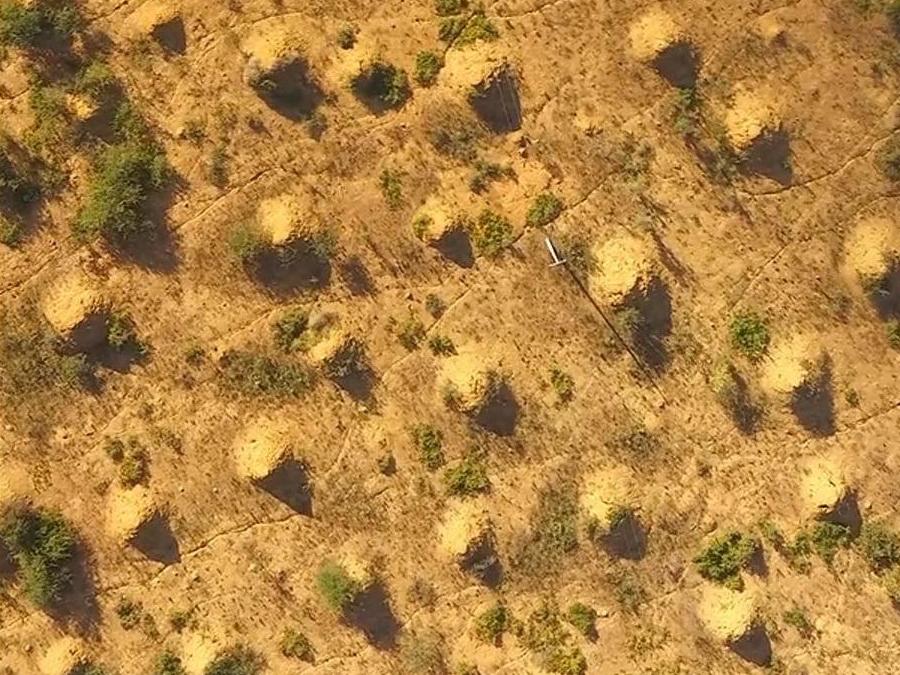 A super termite colony that stretches as wide as England has been built since the times of the pyramids in ancient Egypt, scientists have discovered.

The researchers studied a vast landscape of 200 million cone-shaped mounds in northeastern Brazil taking soil samples from 11 locations and found that some began to be built around 3.820 years ago.

About 2.5 meters high, 9 meters wide at the base, and spread over 230,000 square kilometers, this is a large business that moves on the earth – but the mound is not an individual termite nest.

Instead, each is a "waste point" where termite workers dispose of land and other material excavated in the production of extensive underground tunnel networks that they have used to cross the landscape in search of food for thousands of years.

The authors of the new study, published in the journal Biology at this time, saying "biological miracle" is similar to the ancient world, but with the civilization that built it still in residence.

"This is apparently the most extensive biotechnology effort in the world by one species of insect," said Roy Funch of the Universidade Estadual de Feira de Santana in Brazil, one of the authors of the report.

"Probably the most interesting of all – the mounds are very old – up to 4,000 years old, similar to the age of the pyramid."

The mounds are mostly hidden from view by caatinga, various thorny plants, like deserts that are unique in Brazil, and were only revealed to international scientists decades ago when the land was cleared for grazing.

Now sampling from the oldest humps has revealed that the area has an age comparable to some of the oldest termite colony structures known to exist in Africa, while others began to be built around 600 years ago.

They have evolved in response to a drought-prone environment where annual leaves fall is a booming time to harvest food, interspersed by long periods in which resources are scarcer.

"These mounds are formed by a single termite species that dug a massive tunnel network to allow them to access dead leaves to eat safely and directly from the forest floor," said Professor Stephen Martin, a social insect expert from Salford University and author other.

"The amount of land excavated is more than 10 cubic kilometers, equivalent to 4,000 large pyramids of Giza, and is one of the largest structures built by one species of insect.

"It is remarkable that, in this day and age, you can find a biological miracle unknown & # 39; from this size and age, with the residents still present. "

Mounds are not the only entry point to the tunnel network – termites that appear at night to scavenge using dozens of smaller entrances between each waste point.

By examining the mounts cut in half by road construction projects, Professor Martin and colleagues also showed they did not have complex honeycombs that are usually associated with termite nests.

Instead, each includes a large central tunnel – measuring 10 cm – connecting to a network of underground tunnels and a series of horizontal "galleries" containing dead leaves or larvae.

"Tunnels have never been left open to the environment, putting aside their use as a ventilation system," which makes them confused how and why they are made at regular intervals like that.

One theory is that each mound comes from a competing colony, but when they move termites to the mound their neighboring neighbors are not invaded and attacked.

This shows that termites blend underground, sharing a network of tunnels because of the need to collect food. However, when the test is repeated with termites from 50km away mounds, direct attack response, shows the limit for their cooperation.

Arsenic aroma of shared pheromones used throughout the tunnel network is the main way to identify local neighbors. Professor Martin and his colleagues showed that this aroma marker can direct termites to each bump point to ensure maximum efficiency and lead to the same distance.