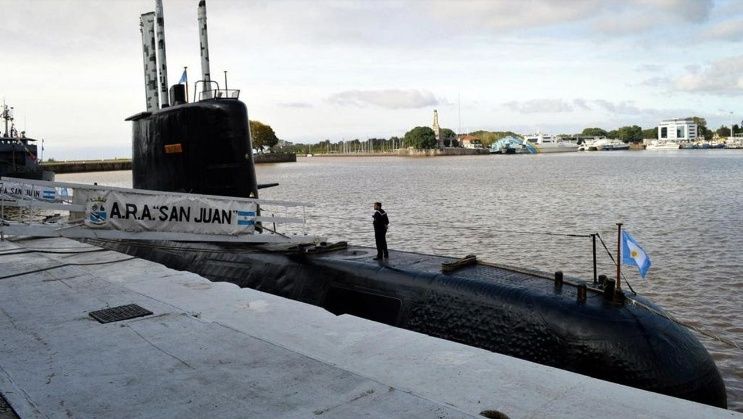 "It was a catastrophic event, caused by many reasons: there were technical failures in the submarine that were aggravated by the long and comprehensive mission entrusted to the crew of the ship, said Telham's specialist.

The result "had to do with the decision to order the dive to check the condition of the batteries affected by the fire principle, " he added.

The find of ARA San Juan was held a week ago 500 kilometers from San Jorge Bay, at Comodoro Rivadavia and at a depth of 907 meters.

Writer and expert in the Middle East, Calderon traveled countries such as Saudi Arabia, Kuwait and Libya as sub-unit of the TR-1700 submarine manufactured in Domecq García shipyards and had a design similar to ARA San Juan.

Shipyards are owned by a company formed by the Argentinean state and the German company Thyssen Norseewerke, with facilities in Endem, where the submarine of the Argentine fleet was launched in 1985.

On November 14, 2017, ARA San Juan flew in the middle of a storm, with a raging sea of ​​waves over eight meters high.

Under the assumption that the three high-ranking naval forces who are analyzing the cause of the accident are going to handle, the water entry through the Eco 19 valve has affected the ship's marine batteries, which has caused a fire.

Faced with this situation, Calderon believes that submarine commander Pedro Fernandez "had two possibilities: to remain on the surface and ask for a ransom" to be done in unfavorable weather conditions or to get down to a safe level (about 40 meters). the condition of the batteries.

"Both decisions are potentially risky, although in my opinion it is worse to solve the diving and not to remain on the surface." It had to be a very difficult decision, as it was a maneuver that had to be done with latent failure ", said the specialist.

The use of the Eco 19 offshore offshore is another important aspect in the tragedy review as it is an element that must always be used in the port, which becomes a snorkel (a device designed to extract air from a surface) into a chimney capable of eliminating the toxic gases that remain inside the submarine.

For Calderon, the operation of Eco 19 in navigation is "a very risky and deeper dive" and therefore "if it can be certain that a deflation has occurred due to the entry of water" through this pipeline. "It's something that happened in immersion, not on the surface."

As far as submarine maintenance is concerned, we mentioned the hull, a hull route that is practiced in this type of ship in a dry dock where the biological inlays are removed and the valves are checked, along with other technical procedures.

"ARA management San Juan said the hull had to be done for 18 months and extended to a maximum of 24. But these repairs were not made to it since 2014 since it was repaired, which means the submarine did not have specific support through almost three years, " Calderon said.