Calvo warned Sandlers about the recessive cost of monetary policy 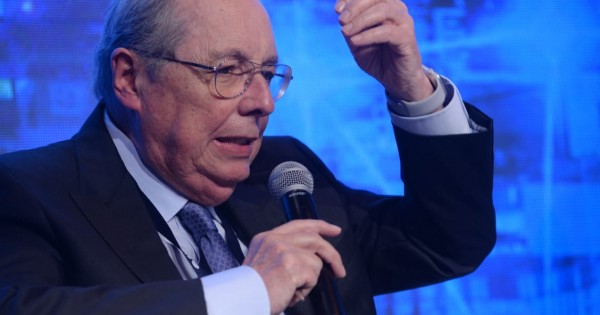 A select group of Latin American economists shared a closing panel with Central Bank President Guido Sandler at the International Economic and Finance Conference (CIEF) and admitted that its monetary policy control program with zero-growth monetary base has so far "worked better of what can be expected, "said Miguel Quiguel.

But not all were roses. The strongest warnings were from Prof. Guillermo Calvo, a professor at Columbia University, and Augusto de la Torre, a former Ecuadorian central banker, who warned that it was a monetary policy choice with inherent risks. The first one was announced by Calvo: "They are more recessive (with regard to other disinflation strategies), that's bad news," he said at the time: "The good news is they say in the market:" I am , crashing, there's a little money, and it's already a "" sign.

According to Calvo, what is happening is that "with highly indexed wages, the exchange rate does not hold (inflation)," and other instruments such as the interest rate to coordinate expectations are needed. "There are very few countries that have used a monetary aggregate as an anchor," he added, noting that Paul Volker, a former US Federal Reserve chief during the Reagan presidency, decided at the time to abandon the general scheme and to change them. with the interest rate.

They forecast a renga recovery and the edge of the election

De La Torre, on the other hand, explained that Sternegger was impatient and warned Sanderis not to repeat the mistake: "The recent experience of Argentina is an example of a country that wants to reach the Promised Land, which is too fast. Colombia, where it took more than 20 years of anti-inflationary policy to reach a scenario where expectations of price formation and wage renegotiation have been brought into line with the Central Bank's goal.

In this sense, De la Torre said that "there are no cases of inflationary targets that have started at excessive levels" and I recall that in most cases inflation targeting she was chosen to reduce inflation when it was close to the annual figure.

"We do not need to be incompatible," the Ecuador Council recommends, over the long transition from the high inflation area to the "promised land", to the many tools to be combined.

"You need to know how to live with the transition, you need trust," he added, adding the interest rate without any shocks to the exchange rate, economic growth and disarmament of the Central Bank's debt accounts as elements that are gradually building up. and the credibility of the monetary authority cumulatively.

Sandler does not dull her ears, but she paints her colleagues' warnings that "everyone has their recipe" for the fall in inflation and defends the chosen scheme to control the monetary base with floating gangs.

The CEO of BCRA said that "it is obvious that the Sturzengeger program has stopped working," and admitted that his program might look a little old or outdated, but managed to keep the exchange rate between the groups.

De la Torre recommended to Sanderis to investigate the case of Pere, who managed to escape the partial dollarization of his economy to the extent that the Peruvians began to save in local currency. And above all, I warned him that the high interest rate is not necessarily a sign of the strength of a central banker, but it can be a demonstration of weakness as long as it can not be reduced without destabilizing the macroeconomic variables,

In turn, Calvo noted that the exits of the crashes of the sudden cessation of the exchange rate, such as those experienced by Argentina, have real wages of the order of 30% and that if wages are not separated from prices, the recession Find your floor: to agree that we are in a state of shock where there will be a real salary, "Kalavo said, and noted the difficulty of achieving a real wage decline with Argentina's high employment rate.

Before all these red lights, Sanderis tried to calm down and insisted that under his direction the central bank would be very cautious and that "there is nothing in Argentina to prevent" that we live with inflation at an annual figure.

Copyright La Politica Online SA 2018.
Please do not cut or paste our notes on the web, you can distribute them through our tools.