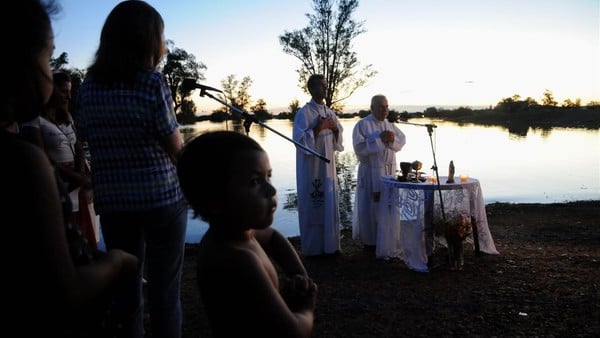 Concordia Bishop Monsignor Luis Colazouol today rejected the realization in a public hospital in this city of Ente Rios of abortion in the fifth month of pregnancy of a juvenile who had become pregnant as a result of rape, a fruit that – he says – He remained with vital signs for several hours .

In a statement, Collazuol is showing his "deep pain" that he could acquire knowledge, he says, through a digital environment that says "the baby was born alive and struggled for several hours to continue living, his heart ceased to win.

Termination of pregnancy has taken place following a court order, as abortion for rape is part of the current law on non-incurable cases and this Protocol, endorsed by the Supreme Court of the nation, which does not establish any time limit for its implementation.

The director of the hospital, Delicia Concepcion Masvernat, where the abortion was done, Dr. Miguel Ragon, believes that there is a legal "blow" because even though the fruit is not possible until 22 weeks, then it does "doctors have the behavior to help him."

In a statement, Collazuol is showing his "deep pain" that he could acquire knowledge, he says, through a digital environment that says "the baby was born alive and struggled for several hours to continue living, his heart ceased to win.

"No individual right can justify the abolition of human life that can not be protected," he says. He adds that "when a woman is pregnant, we are not talking about one life, but two, mother and son or daughter in pregnancy." Both must be preserved and respected.The right to life is the basic human right. "

– Resolution 2883 of 29 August 2017 of the Provincial Ministry of Health, according to which the provincial government adopts the "Protocol on the overall care of persons entitled to a legal interruption of pregnancy". (ILE), prepared by the Ministry of Health of the Nation during the previous administration, and not removed by the current government. "

It states that "the Constitution of Entre Ríos province in its art.16 states:" The province recognizes and guarantees to people the right to life and, in general, from conception to worthy death. No one can be deprived of it arbitrarily. "

After noting that "this fundamental right can not be changed by a lower order regulation," he stresses that "for this reason we understand that the competent provincial government must dictate a resolution that repeals the previous one."

Dr. Ragon, told the janitorl Entre Ríos "As doctors, and this was explained at a meeting with members of the judiciary, abortion is considered as up to 22 weeks or 500 grams, plus / minus 50 grams." For example, a 18-week-old boy weighing 350 grams, organ formation is not It's not viable, no matter how much it's done, it's not viable. "

"According to the protocol we have, it will not be viable until 22 weeks, no matter how much it is taken, it will end with the death of the fetus or yes." Anyway, there are holes in the law, "he said.