Corals flourish in the depths of Rifa 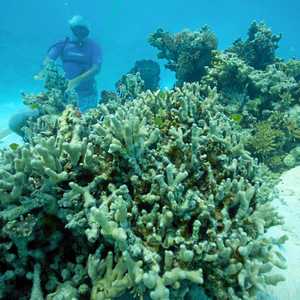 Approximately 200 species of coral have been found thriving in deep parts of the Great Barrier Reef, more than six times earlier than those recorded at the same depth.

Scientists use remotely operated vehicles and specialized divers to study coral reef species between Torres and Townsville at a depth of 125 meters between 2010 and 2016.

Their findings are published today in the scientific journal Proceedings of the Royal Society B.

Dr. Mure, who dived a maximum of 40 meters to explore deep-sea areas, said the research team was surprised by the findings.

"Corals need light for growth and have always been associated with braids," he said.

"I think the perception is that those deeply discovered are only a few species and are not very large in the deeper areas.

"But we dropped that from the water.

In his view, the findings represent roughly half of the coral species in the region, suggesting that deeper habitats can play a significant role in conserving the coral's biodiversity and helping restore the damaged areas with shallow reefs.

"If there are major bleaching events and major cyclone events, while shallow reefs can be quite desimed in places, deeper reef regions seem to escape with much less damage," he said.

"Because there are so many species there, the chances of extinction of species in the local areas are much lower.

"There is also a potential for these deep corals, it is time to spawn, to settle on a shallow reef and to help the shallow reef to recover."

Researchers hope to return to the depths to find out whether deep-sea corals can survive in shallower areas and count populations of different species.