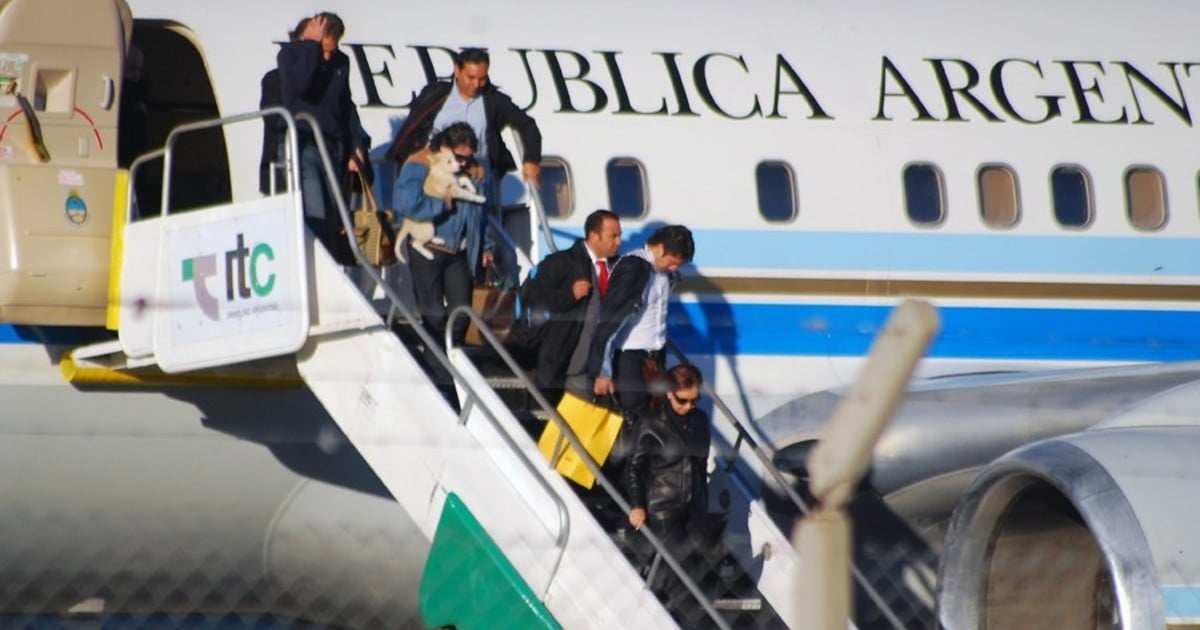 Last week, former presidential fleet pilots during Nestor's government and Christina Kirchner before judge Claudio Bonadio finished their testimony. Within a cause that has been set up to determine whether there are flights that move newspapers during weekends, the former presidents have settled south. Some testimonies point to this in some cases "together with the newspapers, they also took furniture."

Prosecutor Alejandra Mangano was the one who opened the investigation to determine whether "during the years 2003-2015, voyages with the Presidential Air Force from Buenos Aires to the cities of Rio Gallegos and El Calafate for purposes that exceeded the powers with what does the executive have, "as stated in the request.

When he tried the former Kirchner's personal secretaries, Bonadio asked for flights to Santa Cruz to be investigated, according to which only newspapers are reported. It is suspected that public money has been appropriated.

The magistrate determined – on the basis of a series of testimonies – that during the presidencies of Nestor and Christina Kirchner flights were made by airplane for the sole purpose of taking the newspapers to those assigned by that city in the cities of Rio Gallegos and El Calafateas well as other elements that are not related to the public function. "

Therefore, the judge asked for an investigation to be initiated to confirm whether the misappropriation of public funds was committed.

In this context, Jose Luis Buxtos, Umberto Tretola, Carlos Martin Gonzalez and Jose Alberto Luna were called to provide "more information on the transfer of newspapers" from the Federal Capital South. TThey all confirmed that there are flights for the sole purpose of "taking newspapers to Santa Cruz".

Last week, according to court sources Clarin, Sergio Potro Velasquez, a former president of the presidential fleet, has also testified. He confirmed that during the weekends when Nestor and Christina Kirchner were resting in Santa Cruz, "they took the newspapers on the plane that was available," he told Bonadio.

He also said the aircraft they used were unclear, that in some cases this could be Tango 03, like other presidential fleets.

As for tango 03, public accusations have already been formulated by Mariana Zwichi, an ally of Elizabeth Kariu, and the wife of Eduardo Costa, a former candidate for governor of Santa Cruz, who said she had traveled during weekends when former presidents dwell there " only newspapers move. "

Another of the pilots who gave testimony said that at the beginning of Nestor Kirchner's presidency "the newspapers were sent to the first line of a flight to Aerolineas Argentinas, but one weekend had a significant delay in arriving at the flight," and since then the order was to be sent with the presidential fleet, "explained the sources of the cause.

Among the witness testimony requested by Mangano and the magistrate's statement, one of the above mentions that sometimes, mostly flights to El Calafate from presidential aircraft, "heavy and large newspapers and furniture have been moved."

One of the statements on which Bonadio is based to order an investigation is that of José Luis Bustos who told the judge: "We had a flight we called" el diariero "because we were flying weekends – Saturdays, Sundays and holidays – and we generally moved only the newspapers, usually departing at 6 am from Aeroparque. The flights were made only when the presidential family was south and could have been to El Calafate or Rio Gallegos. The people who traveled to El Calafate or Rio Gallegos They went with their bags or bags, did not send them".

These statements were ratified in this new case, as this first statement was made within the corruption file.

Added to this statement was commissioner on board, Angel Alejandro Hate, who left in his testimony another suspicion of K's flights: "I saw that trucks or wagons have arrived directly from Olivis with Presidency officials who loaded the suitcases directly into the hold. This baggage has not always been scanned by the airport security police mobile scanner. Sometimes it was luggage and sometimes furniture, such as El Calafate, which I think they were a hotel for the amount (…) they came directly on board from the presidential wagons and once we dealt with them to avoid scratching the airplane's furniture.

Study on the cost of transfers

Along with the testimonials already taken, it is investigated what the cost of moving planes is for the transfer of newspapers over these weekends. He was also asked to join the cause the regulation that regulates the distribution and distribution of presidential travel costs, with special reference to those relating to the air fleet. "

Similarly, the Presidential Airline's Archives was invited to provide documentation relating to the period 2003-2015 which "provides air transport and the apparent procurement of passengers on each of the airplanes concerned to provide services for the Presidency".