"It's Impossible to Do not Touch It Drunk": Bad Messages to the Teachers of the University of Cordoba for Their Students – 02/12/2019 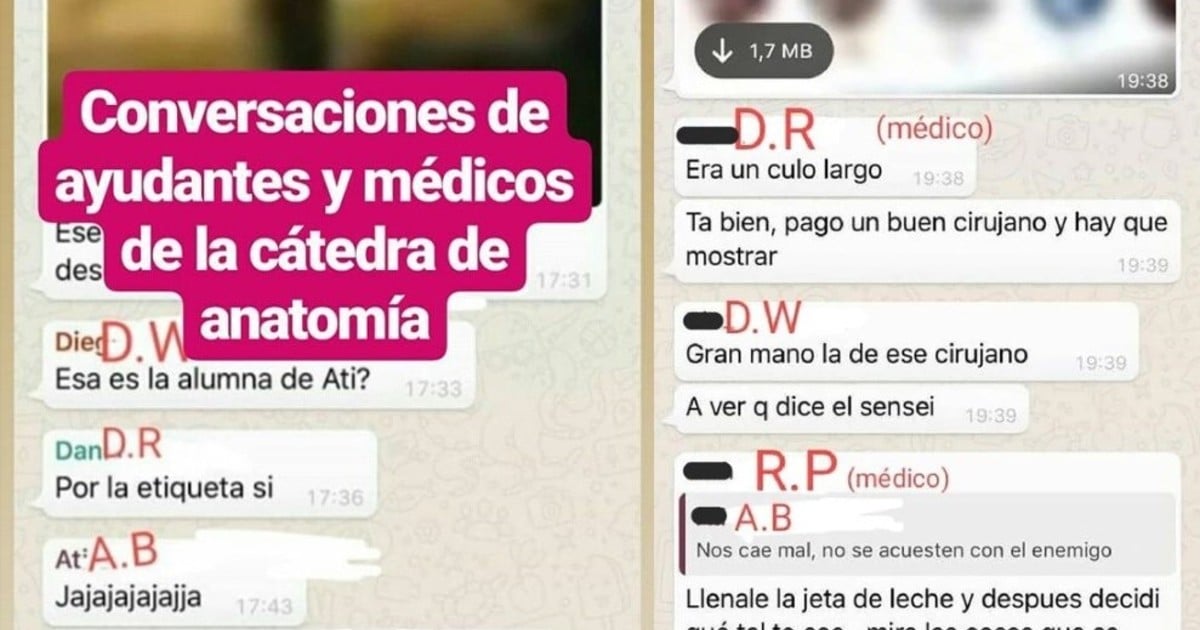 On Sunday night, the institutional life of Cordoba's National University began to change forever. A group of students from the Faculty of Medicine distributed a series of photos of WhatsApp group on Twitter, integrated by teachers and assistants of the Department of Normal Anatomy, where they shared photos of the students and thought about them with misogynistic comments and sexuality. Even naturally speaking about the circumstances of abuse of power.

Fury has begun to grow on social networks when the images and chat dialogues appeared. At the same time, some students added testimonies that reported differently bullying and abusive situations in the classroom.

"We realize that gender-based violence is practiced daily in our faculty," they said in the UNCG's Gender and Diversity Commission.

"What you want to cry is the most abhorrent in the world," is one of many responses that generates screenshots, they were exposed (with the initials) of each member of the WhatsApp questioned group.

"What a bitch, it's impossible not to touch her," one of the group's rough phrases said.

"I sent them to the jeans jacket on the beautiful playground and said" what an eye, see what this dirty sleeve will touch "; "Student, things happen in my pants when I see her"; "Fill her glass with milk and then decide how it will fall … look at the things that this boy thinks," are some of the condemnation phrases that are read between the messages that teachers and teaching assistants share. Among them, they analyzed and told about the physicists of the students.

Among the lecturers and assistants, they analyzed and told about the physicists of the students.

The comment that caused the most outrage was a response to a video that a student recorded and shared outside the faculty. On these images one of the group members said: "What a whore, it's impossible not to touch her.

"There have been rumors a long time ago for teachers who are cruel, but now it all goes to another level," says one of the complainants.

The charges caused such a mess Instagram groups have been created to channel testimonials, brings together actions and provides support to the victims of harassment. At the same time, from the Instagram account of the Open Commission on Gender and Diversity, they said, "From the WhatsApp group's viral screenshots to the First Year's Assistants and Teachers of Normal Anatomy, we expressed the biggest rejection before the onset situations apparent gender violence on their part ".

"We know that gender violence in our faculty is practiced on a daily basis for this reason, we organize ourselves in the committee and invite those willing to participate, "they added.

"This guide expresses the maximum rejection of this type of action," the University said.

The university authorities reacted with a statement in which announced that it would launch an internal investigation: "Taking into account the transcended social networks relating to alleged cases of harassment in the field of the Faculty of Medical Sciences, Rector of the National University of Cordoba and Mr. Dekan of the Faculty of Medical Sciences assigned to the Director of Legal Affairs the house that immediately goes to investigate the events in question. "

Officials said an investigation would be launched.

In addition, we invite you to add testimonies to help with the search for information: "Without prejudice to this, those who feel affected by events of this nature may attend the Dean of the Faculty of Medical Sciences or the Ombudsman of the University Community to formulate their complaint, guaranteeing their confidentiality in accordance with the provisions in force. This guide expresses the maximum rejection of this type of action. "

Well-known assistants and anatomy doctors are humiliating students with total freedom, and these people get paid and have a place to teach. ASCO

In a dialogue with Radio Universidad, UNC Rector Hugo Juri said: "I have all the information we have at our disposal and we are bringing it to justice. we will do what we have to do at the university"Even if there is no crime, we will summarize, because it has influenced the reputation of the National University of Cordoba, Argentinean education, and the Coroness."

– He unveiled the pot that would be hard to stopA long time ago, there were rumors of teachers who were cruel, but now it's something else. The Department of Anatomy is just one thing, but it's happening throughout the faculty, "says Sung Domingues, a medical career student, member of the committee, and also part of the Gender Secretariat. and dissidents from the University Federation of UNC.