The strange dunes shot by NASA on Mars 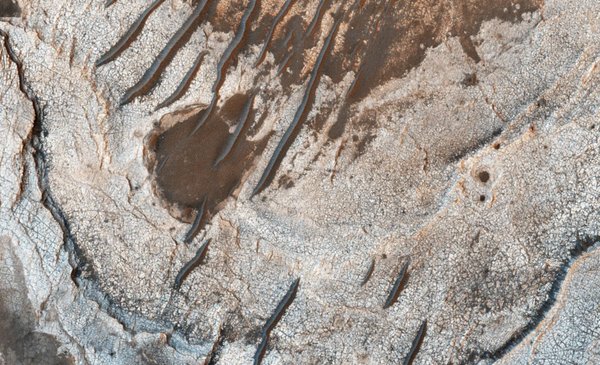 New images of HiRISE High Resolution Instrument on NASA's Mars orbit reveal the erosion capacity of the wind on the surface of the Red Planet.

In the top picture there are many sand dunes. They have an elongated form of a crescent moon and are called "dunes of Barchan." They are formed by the continuous wind action that blows in the same direction.

The orientation of these dunes indicates that the predominant wind blows from right to left (east to west). The wind constantly moves the grains of the sand along the longest slope of the dune to the top. The small bumps in the slope are caused by this movement. When sand grains reach the top, they descend on a steeper and shorter slope, which is therefore unobtrusive. This is the gradual movement of the sand, which causes the dunes to move slowly over time, NASA reports.

Another photo taken by the HiRISE camera shows how surface erosion reveals several layers of light tones, probably sedimentary deposits on the surface of Mars.