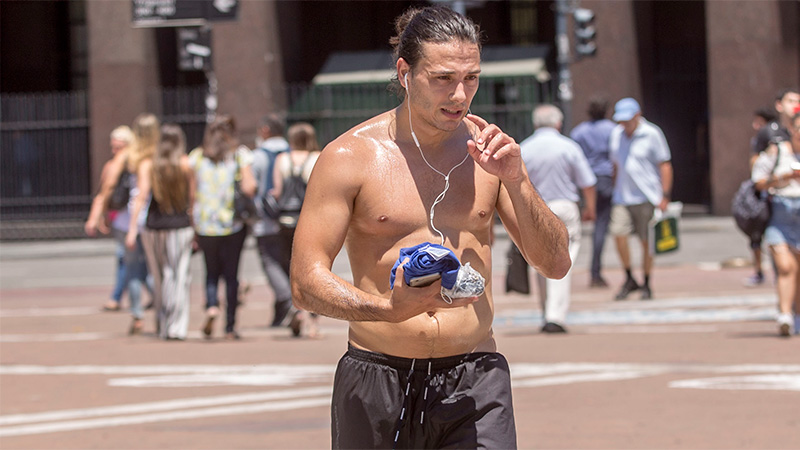 On Monday, the thermal sensation, according to the records of the National Meteorological Service, was 41.6º in the 14th hour.

Some recommendations to cater for the high temperatures that are recorded in much of the province and the country.

Typically, the "heat stroke" occurs when people are exercising in a hot and humid climate without drinking enough fluids. But this can also happen to people who do not exercise any physical activity.
Older people and those with health problems can be particularly affected, so they need to be very careful in the conditions of strong heat.

Who are the most vulnerable?

Those who are most at risk are:
– Children up to 5 years old and children under 1 year of age
– Those who suffer from chronic diseases that can be: heart, kidney, mental or neurological.
– Children with fever for another cause or diarrhea
– Obese or malnourished
– Those who have skin burned by the sun
– Those who abuse alcohol and drugs
– The adults

To prevent a heat shock, the following tips are detailed:
– Try not to be too active and take breaks when training.
– Drink plenty of fluids, such as water or sports drinks, so that you do not feel thirsty. However, do not force yourself to drink very large amounts for a short time and do not drink so much fluids to avoid feeling discomfort.
– Do each exercise at the beginning of the day before the room temperature rises too much.
– Dress light and wide clothing. Avoid using too many layers. Remove the extra clothes you wear.
– Avoid being in a hot car.
– Do not expose to sunlight between 10 and 16 hours.

To refresh your body:

– Take a shower or a cold bath.
– Drink water or a sports drink. Do not drink beverages with alcohol or caffeine.
– Spray with cold water and then sit in front of a fan.
– Look for the shadow. Enter a building or car with air conditioning.
– Place a compress or cold cloth on the neck or under your arm.