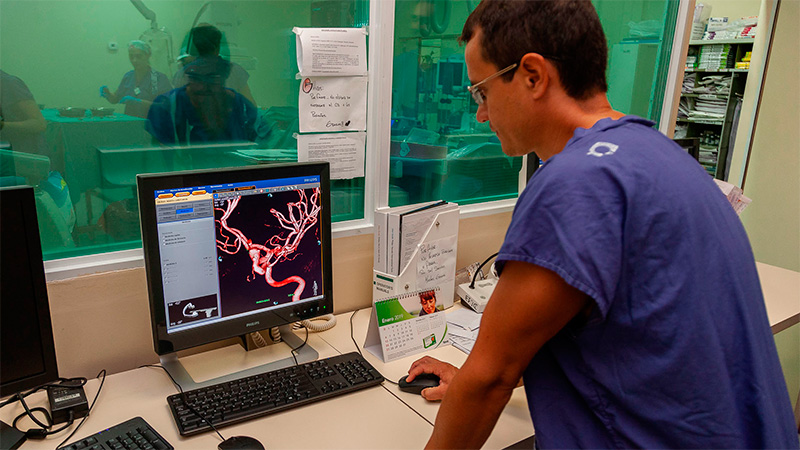 At times of severe heat and cold, the incidence of cerebral aneurysms increases. The San Martin de Parana Hospital is one of the country's seven public surgeons to treat this type of pathology, and three patients between the ages of 40 and 70 have been embarked on the last weekend of January.
The Department of Health of Entre Ríos through the Office of Hemodynamics at San Martín de Paraná Hospital underlined the importance of developing neurosurgery in this highly complex public effector for the treatment of brain aneurysms so that in 2018 they performed an average of six procedures per month . During the last weekend of January, they operated with three patients between the ages of 40 and 70 with no previous history.

In the summer season, due to the high temperatures, there is a greater predisposition for people with risk factors to suffer from cerebral aneurysm, which consists in weakening the arterial wall. The main reasons can be high blood pressure, cholesterol in the blood and smoking. While more rare are congenital diseases such as polycystic kidney and Ehlers-Danlos syndrome (defects in collagen production), among others.

The neuro-surgeon at the head of the effector embolization team is Raul Maehara, who claims that the major symptom of cerebral aneurysm is a severe headache that can lead the patient to coma or death. Therefore immediate attention is important.
Embolization is a minimally invasive neurosurgery that interrupts bleeding in abnormal blood vessels, both in the brain and other parts of the body. In other cases, this treatment is also used to prevent rupture of the aneurysm.

As for the intervention, Maehara said: "When the patient comes in with torn aneurysms, they have general anesthesia because they have to be completely immobile, half a centimeter motion can be fatal."

Endovascular embolization is performed by puncture in the femoral artery, which is the primary one that delivers blood to the lower limbs and passes through the groin. It features a number of catheters where there is a small catheter aneurysm inside which are mounted coils that are micro-aspirated by platinum, thus blocking the flow of blood. After the procedure, the patient usually stays one day in intensive care before possible complications.
As far as the risks of neurosurgery are concerned, Maehara said that they happen because an aneurysm can be torn apart while it is being filled, but it is less risky than an open surgery where the head intervenes directly. it is urgent to take care of it, because if you regain your mortality, it reaches 90 percent.

Cerebral aneurysms have 30% immediate mortality, and in another 30% of cases, after receiving medical attention, the patient dies or is left with serious consequences. It should be noted that they are more common in adults than in children, and women are more likely to develop than men.

In this sense, timely diagnosis is paramount, and it is recommended that first-degree relatives – siblings, fathers and children over 18 years of age – from people who have had cerebral aneurysm, perform angioresonance, examination of blood vessels.
Finally, the specialist in neurosurgery pointed out that after the diagnosis was made and the aneurysm was detected, the planned embolization was carried out where the patient was in, operated and the following day was written.