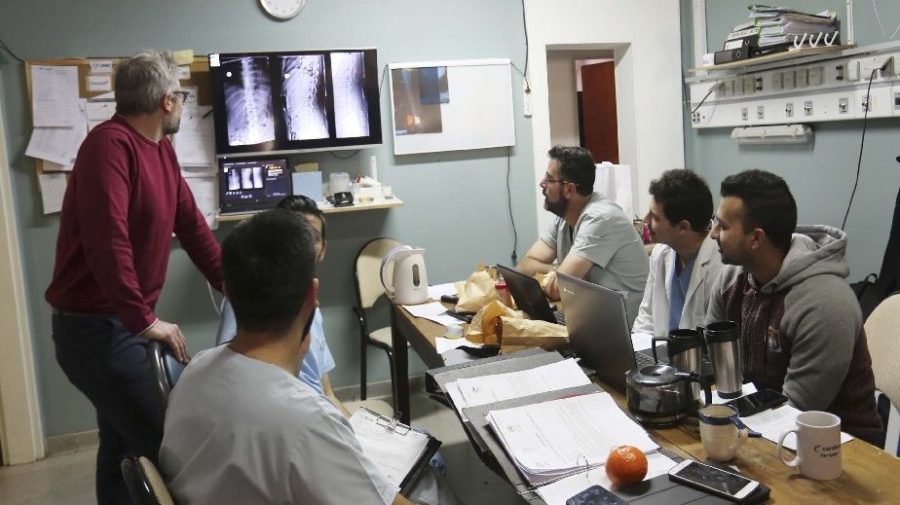 The staff of Pedro Mogilansky Hospital in Cipoletti on Thursday performed two unprecedented column surgeries, something that represents a historic public health event for Rio Negro.

It involved the placement of neurostimulants on two polyoperated patients with conventional unsuccessful spinal surgery and was performed by trauma team members.

The interventions were directed by doctors Omar Peniko, who heads the office, and by Federico Ginobili, both professionals at the institution. In addition, renowned neurosurgeon Fabian Piedimonte, who was summoned through Karahue Orthopedics, is involved in the surgery.

Both practices consist of inserting neurotransmitters and electrodes into the medullary canal, which, through nerve impulses, will continue to modulate the pain receptors in various spinal metamers to improve quality of life and reduce patients' discomfort.

"These are the first interventions of this magnitude and characteristics to be carried out in the area. It is truly a pride that they have led a team of professionals from our public hospital," Penico said.

The professional revealed that both procedures were satisfactory and emphasized that the patients then underwent a conventional postoperative period of basic analgesia and with an optimal and favorable response.

The recovery will be to modulate the neurostimulator every 15 days "in a slow, smooth and progressive manner," said the professional.

"We are talking about poly-surgical patients with conventional spine surgeries at other hospitals that have fallen into public health as a result of the economic crisis that made it impossible for them to continue their treatment privately," he explained.

In that sense, he said that "with our resources we have been able to collaborate so that they have a better quality of life," he said excitedly.

Noting that these devices had never been installed in the area, Penicó stated that they intended to continue performing them, but warned that the intervention should be performed in patients with specific and specific conditions.