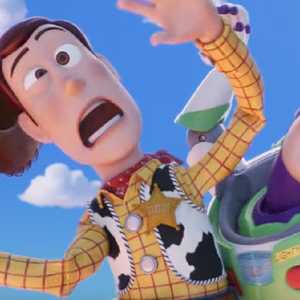 The first teaser trailer for Toy Story 4 is highly anticipated to fall today, and while it's short on plot details, it introduces a new character that will be rumored to be known as Forky.

The short trailer offers POV fixed-cam ring-around-the-rosy with all our favorites and familiar Toy story friend. There is Woody (voiced by Tom Hanks) and Buzz Lightyear (Tim Allen), of course. There are cowgirl Jessie (Joan Cusack) and Mr. Potato Head and fully stretched dinosaurs and Slinky dogs. And then there is a new face that we have never seen before. And the face carelessly attaches to the plastic spork.

The character, named Forky and will be voiced twice Veep Emmy-winner Tony Hale, appears very much to be an art and craft project that Bonnie made (Bonnie being a young girl who inherited all the old toys Andy in Toy Story 3)

According to the official trailer description, the presence of Forky leads to "travel adventures":

"Woody is always sure about his place in the world and his priority is caring for his child, whether it's Andy or Bonnie. But when Bonnie adds a reluctant new toy called" Forky "to his room, an adventure journey along the path of old and new friends will show Woody big world can be a toy. "

Just from Forky's appearance on this teaser, you get the impression that he is … a little very tense.

"I DON'T BUY HERE!" Forky's scream. While toys in Toy Story are always meant to be timeless, Forky seems designed for viewers in 2018 to be seen, sigh meaningfully, and say "Same."