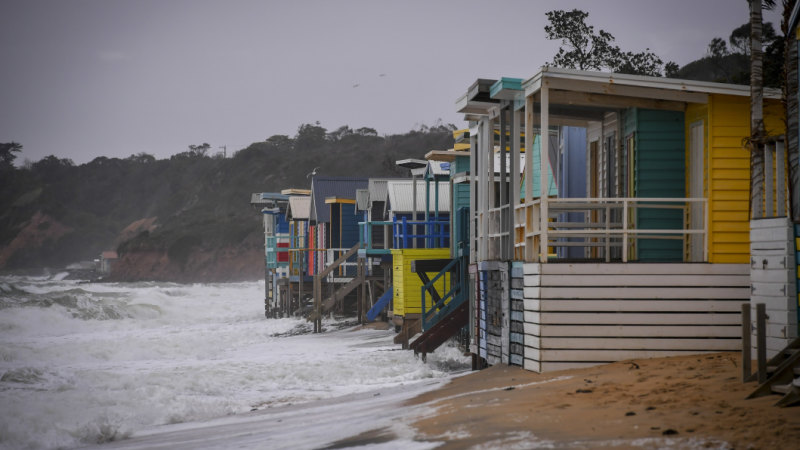 The instability of the cliff face, erosion and encroaching water are among the major threats to the beach.

But Environment Minister Lily D'Ambrosio conceded little could be done to stop the march of erosion into the future.

"The report shows that none of the options available would restore sand or prevent long-term erosion along the entirety of the beach," she said. "Our priority is community safety – we will continue to monitor the cliff movement at Mount Martha North Beach to ensure that it is safe."

However, government insiders have no plans to remove beach boxes at Mount Martha North, despite a recent report by Water Technology consultants casting doubt on the future of the boxes.

It said if they remained, the foundations needed to be reinforced, in contradiction with the Environment Department policy.

The consultants also cited a survey that found respondents wanted to be able to walk between the north and south beaches of Mount Martha, which could require the removal of beach boxes.

“To enable this activity to continue into the future as sea levels rise, the future location of beach boxes will need to be assessed as they will restrict pedestrian access along the beach.”

Mount Martha North Beach chairman Alan Farquhar said the beach had about 100 bathing boxes, some of which recently sold for up to $ 70,000.

He said his group would continue fighting for government action to preserve the beach.

"This is something not going to take very kindly," he said.

Mr Farquhar urged the government to reconsider other options such as a rock wall.

He said it would be a tragedy to lose the bathing boxes. However, he said much of the cliff face behind them had been eaten away.

Mornington Peninsula Beach Box Association president Chris Maine said he was alarmed by the prospect that no further action would be taken to save the beach.

He conceded the financial worth of the beach boxes had fallen. "But value is not the most important thing by a long shot," he said. “They are not seen as an investment. They are there as a summer facility. "

The Water Technology report suggests the beach is only used during the summer.

“Mount Martha North Beach should potentially be considered a high amenity summer beach rather than an all-year round beach, or alternatively, an ongoing commitment to regular beach nourishment is required if a winter beach is considered highly desirable,” he said.

Benjamin is a state political reporter