'Mum just had a headache, now she's about to die' 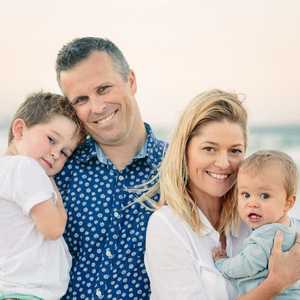 When Lance Lancaster-Sully went to her GP complaining of headaches, she never expected to be diagnosed with two aggressive brain tumors.

Now, the 36-year-old Gold Coast mother of two is fighting for her life.

Tomorrow, surgeons at Pindarra Private Hospital at Benowa will attempt to "chip away" at grade 4 primary glioblastoma which can not be removed because it is on her brain stem.

Mrs. Lancaster-Sully, an otherwise fit and healthy woman who has pilates three times a week and loved riding bikes with her children, is too sick to be interviewed but her sister Sally Kulig said the delicate operation carries a high risk of death or severe brain damage.

"She knows the odds but she's a fighter, and she can figure herself running to the top of Burleigh Hill, near their home next to Tallebudgera Creek (Palm Beach)," said Mrs Kulig, 38.

"If she pulls in and gets well enough to have radiation, then she might live for six months, otherwise she has four weeks."

The shock diagnosis has gutted the close-knit family, which has already dealt with so much heartache.

Mrs. Lancaster-Sully and her childhood sweetheart husband Joel Sully, 39, lost their middle child Jasper at 37 weeks when he was "born sleeping".

Jasper would have turned three on Monday this week.

Their first son, Will, 5, was born prematurely with two holes in his heart and spent seven weeks in hospital before undergoing life-saving surgery.

Despite her troubled pregnancy history, Mrs. Lancaster-Sully, a marketing consultant, wanted to try a third child, and the couple welcomed Kit, now 16 months, at 34 weeks, without major complications.

Six days ago, Mrs Kulig started and a Gofundme page to help her sister source with additional treatment options, including flying to Sydney to see renowned neurosurgeon Charlie Teo.

"The bulb was originally given 12 to 18 months, but that's all changed," Mrs Kulig said.

"In days her condition has deteriorated like crazy and she's too far gone to look at other surgeons.

"She has every confidence in Dr (Leong) Tan at Pindarra but she's in a bad way.

"She is now focusing on the care of her boys; she's not worried about herself at all."

Glioblastoma, the most common form of brain cancer in adults, has a five-year survival rate of 4.6 percent, compared to 25 percent for other cancers, according to the Australian Cancer Research Foundation.

More than 2000 new cases of cancer are diagnosed each year, killing around 1500 Australians.

There are no known lifestyle or environmental factors that contribute to these cancers.