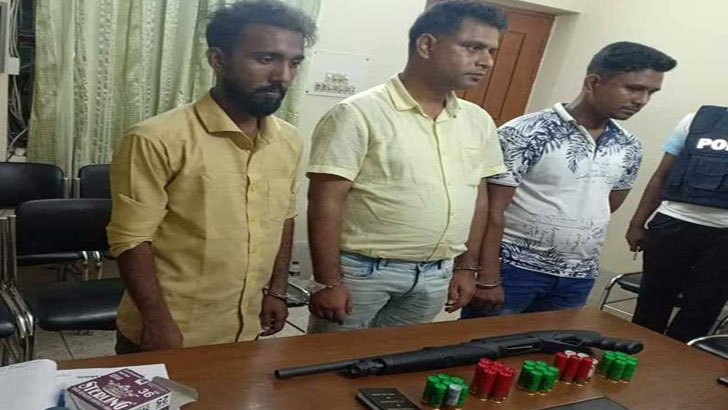 Police have arrested seven people, including central Jubo League leader with arms from Shibbari in Madaripur in connection with clashes between two Awami League parties in the Kaihyle Urban Union in Faridpur.

Police arrested a man and a driver with a gun while searching the car. The detainees were identified as Central Jubilee League leader Hanif Mia, nicknamed Hriti (5), Tapas (5) and driver Md Akhtar (25).

The weapon is reported to be licensed in the name of Hanif Mia. Hanif Mia is the son of the deceased Muslim Ali from Nagarkand district.

The clash between two local Awami League groups took place in the area on Saturday afternoon.

The deceased was identified as Roshan Mia, 42, and Tukhin Mia, 22, while being treated at Faridpur Medical College Hospital and another seriously injured Golam Maula, 42, en route to Dhaka Medical College.

At least five people were reported injured in the incident. The injured were identified as Golam Rasul Biblob, 28, Anis Mia, 28, and Reichan Mia (9).

Three of the injured were admitted to Faridpur Medical College Hospital and five to Nagaranda Upazila Health Complex.

Earlier, Hanif Mia was out of the area for murder. In the coming Eid he wants to return to the area and his opponents are interrupted. During the clash with opponents, Hanif Mia and his group.

Central Jubilee League leader Hanif alias Hearts was on his way home from Dhaka on Saturday afternoon when cold supporters attacked him.

The fatal incident occurred when Hanif opened fire with a weapon close to him.