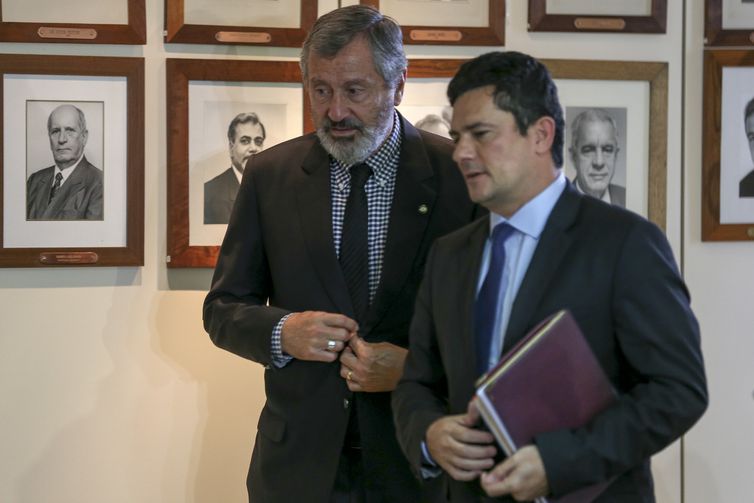 Federal Judge Sergio Moro met this afternoon (8) with Justice Minister Torquato Jardim to discuss the government's transition. In January, Moro will take over the supremacy of Justice and Public Security under Jair Bolsonaro. Future ministers say that popular dissatisfaction with security is the message given by the polls and at that time the state requested approval of legislative steps to "equalize" the problem.

"Elections convey the message that there is a large population dissatisfaction with public security, which is a serious problem, difficult to deal with, and needs to be addressed." In part, that is equated with executive steps, apart from the law, but it is the right moment for the presentation of the legislative project, "he said.

Moro added that part of the 10 anti-corruption measures presented by the Public Prosecutor's Office could be saved in a legislative package which would be submitted to Congress, but other points would be removed. He did not want to specify what would be brought forward.

"It would be very bad to advance some of these ideas without them being mature enough … The idea is a strong but simple plan, so that it will soon be approved in Congress. [Um plano] anti corruption and organized nonviolence. They are the next two priorities of management. "

Asked about the density of the country's prisons, Moro acknowledged that it was necessary to create vacancies in this sector, and defend violence for those who committed serious crimes. "It cannot be denied that in the prison system there is often soft treatment, in my view, for crimes committed with extreme gravity." Eligible murder cases, people who have been imprisoned for several years, must be hardened, "he added.

The Torquato and Moro meetings lasted less than one hour. With quick words, the minister is currently expecting the judge's good fortune and said that if he could repeat his "brilliant" role in the magistracy, he would also succeed in leading the suitcase.

Sergio Moro stressed that he wanted to continue the work that was being done in the area and to deepen what he considered progress in recent years. "The aim is to continue the good work that is being done, for the good projects being carried out, to avoid the continuity of loss. I am not one of those who assume that there is a damn legacy," he said.