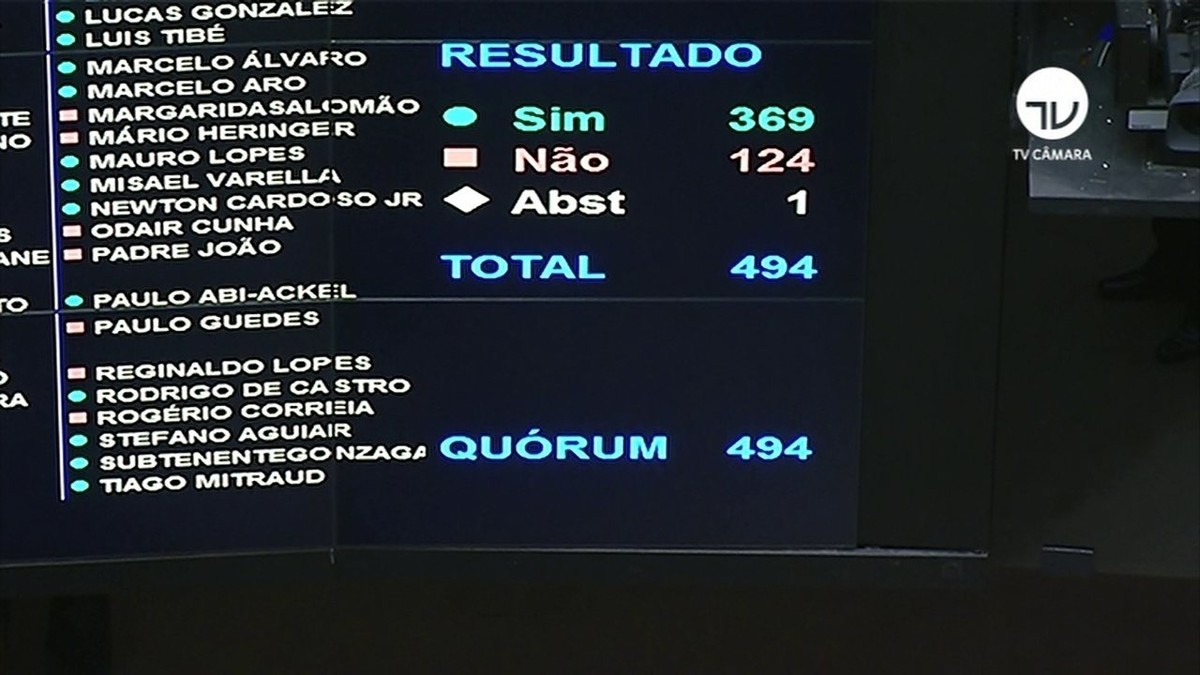 The House of Representatives approved the second round on Tuesday evening (6), with 370 votes in favor, 124 against and one abstention, the body of the Social Security reform proposal. As this was a proposed amendment to the Constitution (PEC), at least 308 votes were needed.

The session lasted five and a half hours. The main text approved on Tuesday is the same as the one adopted on the first ballot on July 10, when 379 MEPs voted against and 131 against.

However, in order to complete the ballot in the second round and send the text to the Senate, however, MPs still have to analyze the eight main aspects of the party to try to remove specific items from the proposal.

To that end, Mayor Rodrigo Maya (DEM-RJ) has scheduled a session at 9am on Wednesday (7) with the agenda starting at 11am. In an interview, he said there would be no "surprises", which means the accents should be dismissed.

Asked about the drop in the number of votes in favor of the reform compared to voting in the first round (nine less), he said there were MPs outside Brazil.

"Some MPs are coming [de viagem] early tomorrow Two from PL, one from PP, two from MDB. At least five more votes coming tomorrow. So our projection is this. I think one or two may have turned into a vote. It is normal for such a vote to have one or two votes to lose, "he said.

He also said he decided to leave the analysis of the highlights of Wednesday's session because some lawmakers were tired and also not to overload work on Tuesday and delay Wednesday's vote. He plans to finish voting in the second round by 10pm.

Considered one of the main pledges of the economic recovery team, the proposal for social security reform identifies, among other things:

The main text voting session began early in the evening.

Throughout the session, opposition parliamentarians have asked to try to delay the vote. However, supporters of the reform were able to repeal the requirements.

For example, the request to withdraw was rejected by 306 votes against. The requests for postponement of the discussion were considered biased and were not even voted on.

President Jair Bolsonaro's motion to close the debate was approved with 353 votes in favor and 10. With this, MPs were able to start the voting process on the main text.

Although the reform was approved in the first round by almost 250 votes (379 to 131), the government had to negotiate with MPs for approval of the second round reform.

The additional edition of the Official Journal, published on Tuesday (6), for example, recorded a bill from Palacio to Planalto to Congress that spends about $ 3 billion on various ministries.

According to the blog Valdo Cruz, of this amount, $ 2 billion will be used to pay parliamentary amendments.

The publication in the Official Journal was hours before the start of the second round of voting on social security reform on the floor.

The release of the amendments was criticized by opposition MPs during Tuesday's vote.

Reporter Ivan Valente (PSOL-SP) said the start of Tuesday's session was delayed as reform MPs await the release of resources.

"It took her a while [a sessão] they start because they end the service. What service? Put the changes in, $ 40 million for every alternate who votes in favor of social security reform and against the Brazilian people, "protests Valente.

Deputies in support of the reform have denied pushing for parliamentary amendments. They also criticize obstacles created by oppositionists.

"The opposition is hindering and preventing funds from working for Brazil's progress. We will or may not want the opposition to vote in favor of the reform, the new social security, so that the country can grow again and be able to bring it back to creating jobs and living opportunities for the Brazilian people, "said Darci de Matos (PSD). -SC).

During the session, deputies in support of changes to social security rules recalled that after the reform review, the House must address other priority economic proposals, such as retirement of state and municipal employees – to be sent by the Senate – and tax reform.

"Pension reform is the beginning, this is the principle of saving economic growth. Consequently, this House has the absolute responsibility to vote on tax reform, as it really voted, following the revision of the federal pact, "said Marcelo Freitas (PSL-MG).

Anrique Fontana (PT-RS) criticized the pension reform and said the proposal did not reach those "above". For the Fifth, Congress must consider proposals for taxing large wealth and profits and dividends.

House Minority Leader Gandhira Fegali (PCdoB-RJ) was applauded by oppositionists and bellowed by governors, as she recalled during a session the recent dispute between President Jair Bolsanoro and President of the Brazilian Bar Association (OAB).

Earlier last week, without question, Bolsonaro said he would one day tell Felipe how his father died – Fernando Santa Cruz, an opposition warrior of the military dictatorship; and that the president of the UAB would not want to know the truth. The statement generates several deviations.

"Finally, [o presidente] It carries glowing enlargements of the very deep wounds that exist in the history of this country, of Brazilian democracy, hurting the honor of the memory of our disappeared dictatorship attacking the family, the memory of Fernando Santa Cruz, whom I ask here to congratulate this plenary. Because we cannot admit that Brazilian democracy and its memory of true freedom fighters have been hurt by a person who has never lived on the pillars of that democracy, with the pillars of Brazilian democracy. Our homage to all the dead, disappeared politicians of the military dictatorship, "said Gandira.

Although praised by several MPs for reform, Rodrigo Maya did not escape criticism from opposition parliamentarians.

MP Erika Cokai (PT-DF), for example, said Maya sometimes acts as a government leader, not as a mayor.

Maya countered and said that he was a "very proud" mayor, receiving applause from supporters.

In an interview after the vote, Maya was asked to release the amendments from the government. So I said I didn't think it was "basic".

"Of course, if you get a community that is overpayed by a doctor and the doctor doesn't go to the clinic or hospital, that's important and maybe urgent. But I believe more than that, it was [fundamental] the certainty that the reform will ensure the organization of public accounts in the future and that we will no longer have those problems where states and municipalities can no longer pay salaries today, much less pensions, "he said. the deputy.

In a recent controversial statement by Jair Bolsonaro – including criticism of northeastern governors – Maya said the president's statements were part of a "political conflict" and did not affect "relations with parliament."