The BSP has softened the Istanbul Convention, but in the lists – only fighters against it (Obzor) 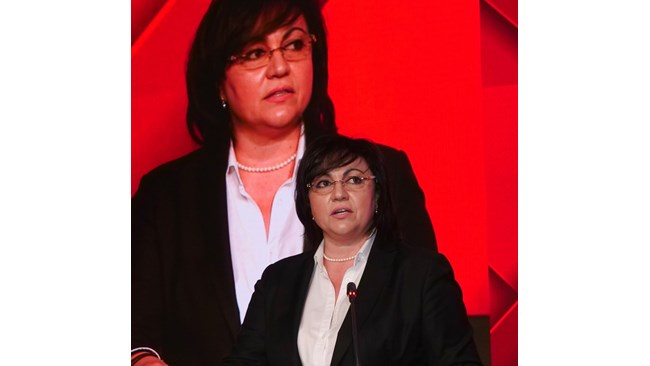 Without oppositional drama at the forum, Ninova promised to win the vote

It is a mocking tone for the Istanbul Convention, not its complete denial, as it has been up to now. This is the result of the BSP Congress, which unanimously approved the red "Vision for Bulgaria" and the Socialist Platform for the European Elections. 676 delegates participated in the forum in the National Palace of Culture.

After a serious discussion in the Vision Committee, a sharp text against the convention was corrected in the document. It was replaced by the following sentences: "Objectively, the Istanbul Convention contains acceptable elements to combat the violence against women and children that we share. But it, as the opinions expressed by experts and society show, is contrary to the Bulgarian tradition and family and this was also reflected in the decision of the CC. "

Despite the change in vision in the platform for the Eurovision, the categorical text remained that the BSP is against the convention.

The topic of the Istanbul Convention has once again become one of the main congresses of the Red House. Despite the scandal expectations, however, the forum went mildly, and Ninova's internal opposition did not take the floor, and no strong criticism of her was heard.

The first topic for the convention was Cornelia Ninova. "We do not promise empty words, but we defend the constitution, the Christian values, the family and the children with painful actions," said the leader. And he said that when the BSP opposed the Istanbul Convention, it was under enormous pressure from both GERB and PES but did not surrender.

Ninova urged her to start the topic of the European elections with politics, not with intrigue and leaf-cutting. She explained, however, that the red lists would include people who would strongly oppose the Istanbul Convention and the third gender, gender ideology at school, the migration pact.

"There are no eternal chairs. Our party does not depend on one person and its chairman, but on the members and the sympathizers, "Ninova also said, adding that he introduced two terms of office for the leader – 8 years, and direct choice. Leadership was not on the forum's agenda, but Ninova uses it as an example that the BSP has begun its change, so people have to believe her to change Bulgaria. And he promised the Europeans' red victory.

The left in Europe has also made mistakes, criticizes Ninova and, among the examples, cited support for migration and gender ideology.

Whoever tries to dig trenches between BSP and PES shoots at his feet, but warned the president of European socialists Sergei Stanishev. And he explained that if the BSP came to power, it would need PES support.

BSP has a chance to win the elections only if it does not make mistakes and does not put dividing lines inside and outside the party as the Istanbul Convention, said Anton Kutev, the Social Democrat. He warned the BSP not to enter into conflict with PES. Kutev alone criticized the societies from the rostrum. The speeches were terminated due to the bad weather in the country.

The regime is trying to destroy us one by one, said Yoncheva

She became the star of the BSP Congress

We are all Elena Yoncheva. You will not be intimidated, violence will not pass. This was recorded by the delegates at the 49th BSP Congress in a statement in defense of the Social Democrat and journalist. It was proposed by the social worker Kornelia Ninova and adopted unanimously.

There is no doubt that Elena Yoncheva was attacked in a political service by the government with an unproven, but unpatentable charge, the statement said. And it is explained that it is the financing of films that have had place in the gold fund of Bulgarian journalism, with funds from "a bank that enjoyed all the privileges and full protection of the first government of GERB". Yongcheva's political and judicial repression is the response of the authorities to her brilliant investigations, the Reds say.

"The regime in Bulgaria is trying to divide us and destroy us, to deal with us one by one. But there is no mode that the story has not stopped. And today, if we want, if we have strength, we can be part of this story, "Yoncheva said. The journalist has become the star of the red congress. Her words returned to the cafeteria, eating sandwiches and meatballs. And after the speech, the hall sent her with wild applause and getting up on her feet. Her former friend, PES President Sergey Stanishev, personally congratulated her.

It is clear to everyone that he runs the most anti-European organization in Bulgaria. The boss, who runs Bulgaria today, says there is corruption as everywhere in Europe. He is right. But the problem is not in corruption, but in the huge robbery – 11 billion, Yoncheva said. There is creeping authoritarianism. This government will go into history as one gang, one criminal group, she added. And he explained that only the BSP could remove this regime, which had already pulled out the big bat.

The party will not happen

"We will not allow anyone to solve their internal party problems through the BSP election result. We will not allow the BSP to become a hostage to personal ambitions and conversions, because this is a 127-year history here. "This was warned by BSP Deputy Chief of Cyril Dobrev, the Red Party on the party's internal battles.

The two years of leadership were extremely difficult, but the party managed to regain its self-esteem and the belief that it could win again. Dobrev called for MEPs' nominations not to compromise, but to raise people in whom society trusts. And explained that the outcome of the European elections is key to local elections, and whether it will be early parliamentary.

"2019th is the year of BSP and we are all in a boat. By common efforts, either we will turn the attitudes of the Eurovision or they will turn us, "Dobrev said.