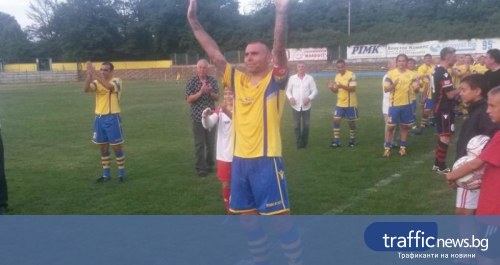 The legendary support midfielder of Maritza and CSKA Krassimir Chomakov made the red coach of Luboslav Penev as the coach of the club after the dramatic dropout of the red from Botev in the semi-finals of the Bulgarian Cup tournament. The match ended 3: 3 in the Army, as Botev scored the equalizing goal with 9 people on the field at the very end of the match. Chomakov has been living in Italy for years, and in June last year he has been staying in Plovdiv and ending his career.

I watched the game and I'm not yet. After two judges' gifts, with two more people, you can not do it in front of an exceptional, great and numerous audience and in the memory of the great Krasi Besinsky. This is unacceptable and shameful. I say a lot, because today there are quite a lot of people between 13-14 thousand, said Chomakov before BLITZ.

Lubo Penev constantly mumbles against the judges. But last night, why did not he speak for them, since neither Botev's first red card nor red was a penalty. I heard him say his players slept the first half. Abe, these boys do not go to camps to sleep. And as they were asleep, why does not he wake them up and kick them from the beds to get up and play ?!

Notice only what happened in the last minutes. You lead 3: 2, your opponent has 9 people and you allow him to scare to your penalty field, win a corner and punish you in such a cruel way. A good coach will run his throat and order to hold the ball, to tear the game – if it is to be broken, to bring the game to the extra time. And there you will already have a huge advantage – and playing because you are with two more, and psychological. That is why the host of the "Army" is not to blame, but the coach. He must lead the game, give instructions. Why else is he getting a salary? A team with a qualitative tutor 10 pins had ordered the goalkeeper, but they would not get him naked.

I read in the forums – some attack the leadership. There is no fault. Not the greatest bosses Ganchev and Indzov, nor the scouts headed by Stoicho Stoilov, who do their job. It is the guy who practices the team. The problem is that in Bulgaria nobody takes the blame. I did not hear such a thing from Ljubo Penev last night. And, frankly, I did not expect to hear. He always attacks the judges. The BFF fined him, he attacks them again. Well, last night, the judges were with you and failed again.

I do not want to downplay Botev's success, on the contrary, I earned the boys the final and I congratulate them. But CSKA had a big game after Razgrad again for the Cup and failed to win it. Not because of the bosses, not because of the players, but because of Lubo Penev. But I can talk more about him, but I do not want to blow up football in Bulgaria. That if I started, I would crash him down, said the 42-year-old veteran.

I want to express my condolences to Besinski's family. I knew him. Years ago, when I was in CSKA, I lived for rent in his apartment. We maintained a relationship – a wonderful person. We were family friends because my wife and his Krasimira fit perfectly and become close. Bend in front of his bright memory! "Added Chometo.