9 arrested as protesters against protest and migration collide in Ottawa 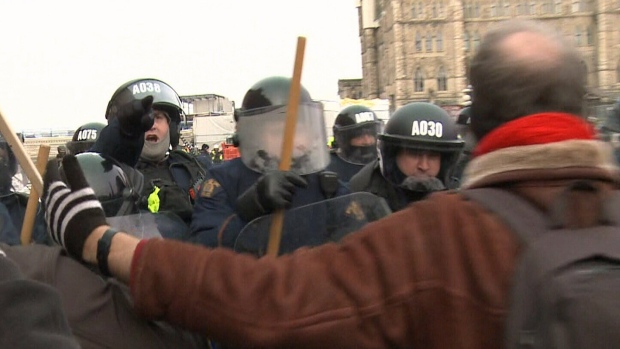 CTVNews.ca Staff with files from Leah Larocque on CTV of Ottawa

Nine people were arrested after protesters and anti-immigrants protested Saturday in Ottawa.

The protests in Parliament focused on whether Canada should adopt the UN Global Compact on Migration, which the federal government says it will sign. A non-binding document aimed at helping countries tackle the growing number of migrants, including asylum seekers, is expected to be adopted at a UN conference in Morocco early next week.

About 400 people visited the protest and the protest in the capital. Both sides were separated from the police of the rebels.

"No hate, no fear, the refugees are welcome here!" – one side chanted.

"I want to keep Canada Canadian!", He opposed the migration to CTV Ottawa. "We will not be able to tell who is coming in this country, how much they have come to this country.

Although most of the nine protesters who were arrested were released, one person faces charges after claiming to have attacked an RCMP officer.

The far-right nationalist group of Quebec, La Meute, which translates French into the "package", joined the anti-immigration camp. The group is opposed to Islam and is known to protest against anti-immigration rallies.

"He gives our entire control over the borders of people and I think it is unfair," said a Quebec protester over his shoulders for the UN pact.

"That's what we are all here for," another migrant said. "We want closed borders and people want to get in here, they'll do it the right way."

The leader of the People's Party of Canada, Maxim Bernier, opposed to the UN pact, was initially expected to protest but was canceled early in the morning on Saturday, a party member said.

"It influences the Canadian immigration system of foreigners," said Sheer. "It is trying to influence how our free and independent media report on immigration issues and can open the door to foreign bureaucrats who tell Canada how to manage our borders." Canadians and Canadians themselves have to make decisions about who comes to our country and under what circumstances. "

At that time, Scheer also said he would submit a proposal to the House of Commons, which would call on the government not to sign the pact.

In the face of criticism on the right, Prime Minister Justin Trudo firmly defended the government's position.

"I think one of the things the Canadians can be proud of is that we show leadership on one of the world's most important issues of migration and immigration," he said in Ottawa earlier this week.

"We demonstrate that rigid systems and open policies actually lead to economic growth and economic advantages and stronger communities, and we can do that in a way that shows world leadership – and, of course, it does not affect our sovereignty – that's something I think Canadians can be proud of. "

Many resistors on Saturday examined the position of Trudo.

"We want to show that there is more presence of people against white supremacy than for that," said the counterprotector.

"We are here to show them to all who see that refugees and all migrants have an absolute place here," he added.

Similar protests and counterprotections took place in Western Canada Saturday in cities like Regina, Saskatoon, Calgary and Edmonton. As in Ottawa, many of the participants were wearing yellow reflective jackets like the protesters who had invaded the French streets in the last four weeks. Many protesters from the anti-immigration party also used Saturday to divert their desperation from the carbon tax.