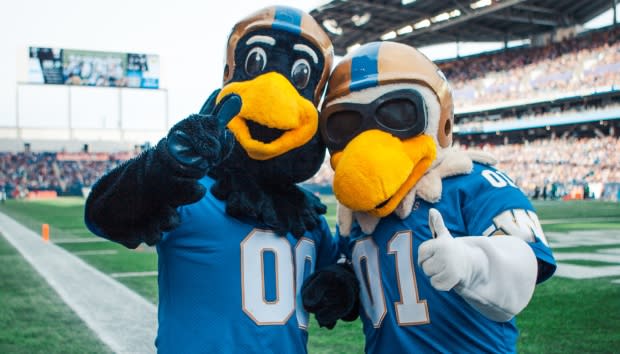 When Winnipeg Blue Bombers lost the CFL's Western Division final on Sunday, it left a big bird out on a long limb.

James Deighton, who will mark his 30th year as the tall, lanky bird mascot known as Boomer – one half of the Buzz and Boomer duo – made a commitment a few years ago that he might live to regret.

He said he would not retire until the Bombers won the Gray Cup again. When the team fell short on Sunday, it has extended the Blue and Gold's championship drought to 28 years.

"It's like a crusade now, you could say," said Deighton, 55, who spends his days as a finance agent with Air Canada at this point, I do not want to be the guy who leaves without the job being done.

Despite all that time since the team and its players were last paraded through downtown as heroes, fans have stood by, Deighton said, tipping his hat to them.

"Our fans are fantastic. I have a lot of respect for them and I'd like to be celebrating with them."

Early in the West final against the Calgary Stampeders, Deighton began making plans to do a lot of high fives.

"I thought 'This is it, that's the year,' and then things started to slide," he said. "Calgary seemed to get their footing and sure enough, the end result was disappointing."

Deighton, who was proud of the sport and the Gray Cup ring engraved from that last championship in 1990 – given to him as a gift from the team – got his start in the costume as an emergency call-up.

His friend was the team's marketing director at the time and invited Deighton to come watch a game from the sideline.

The person performing as Buzz went down with an injury and Deighton slipped into the gear and was "terrible," he said.

People who did not know he was in the costume talked about how bad Buzz's rhythm and timing was that day. Still, he kept the gig, shifting over to Boomer when Buzz was healed.

"I put the work into the audience, our fans, what makes them tick, and the flow of the game as well as putting together skits," Deighton said.

"By doing so, I was able to learn the craft of mascotting."

Since his start, he has seen about a dozen people come and go as the Buzz character, as the demands and physical exhaustion of the job take a toll.

"When you're dealing with a very humid day, it's really dangerous. You've got to be in condition," said Deighton, who goes to the gym every day.

When you're dealing with a very humid day, it's really dangerous. You've got to be in condition. – James Deighton

Now he trained others to perform and duties have been spread over several people, with a team of nine sharing the role.

Deighton still does the game-day antics, but the larger group divides the 180-ish annual public and community appearances.

These include this coming weekend.

Although he will not be behind a bench with players in Blue and Gold, Deighton (and Boomer) will be at the Gray Cup in Edmonton.

He will perform in costumes at Touchdown Manitoba, a Manitoba-style social event with bands, player autographs, and silent auction and Old Dutch potato chips.

He will also be at Bomber House, the team's official fan base during the Gray Cup Festival.

"And I'll be attending the game, as myself."