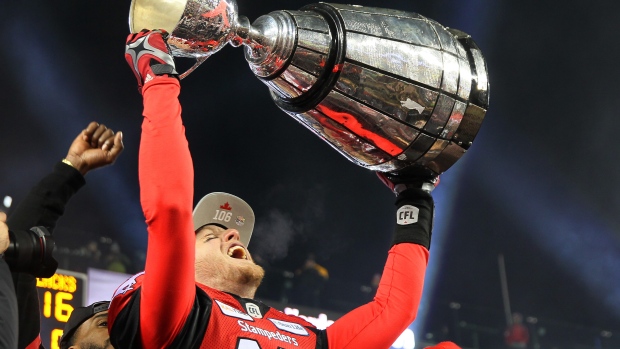 EDMONTON – Quarterback of Calgary Stampedeer, Bo Levy Mitchell, returned Sunday to the Gray Cup winner round, being named the most valuable player in the game.

The seven-year veteran, from Cathy, Texas, threw two breakthrough samples as the stamps led the wire to wire to defeat Ottawa Redblacks 27-16 in the 106th CFL Championship at the Commonwealth Stadium.

The victory came after Calgary lost the Gray Cups in 2016 and 2017 and faced the possibility of being the first team ever since Montreal Alouettes of the 1950s lost three consecutive games.

Mitchell, dressed in a ear with a champagne red uniform, admitted that although he said the game was not for revenge against Gray Cooper's losses,

"He feels surreal," Mitchell said. "I know we talked that the two previous losses meant nothing but we could not make the game bigger than it was We had to realize that this is a game and you can win only one game and win only one Gray Cup I think the guys who were in these two teams, even in the team last year, the emotions in a 30-second hit were not redemption against someone else or the league … as an organization in which we were on the tip is too much to do the job, and it's great to do it for Calgary.

Mitchell, CFL's most prominent player this season, was also the MVP of the Gray Cup 2014, Calgary's latest title.

During the regular season, Mitchell ends 13-5 record marks and leads CFL with 35 TD flaws, although he sees that his hulls are turning dramatically due to injuries.

The 28-year-old became a free agent outside the season.

Asked about his future plans, Mitchell said, "I let my agent cope.

"I'm waiting to see what will happen with (collective bargaining), and I will explore my possibilities by then.

"I love to be here, I'm not complacent, I will not stay here just because I feel comfortable, I have done a lot of work with this team, heritage and this league and I want to continue to build this.

"But for the family and everything, if anything else, it would be hard not to try it out."