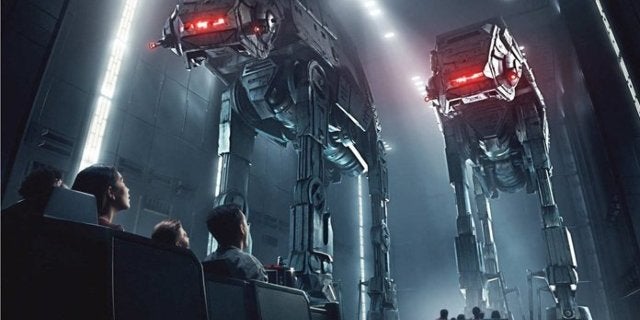 Since Star Wars is one of the biggest brands in history and Disneyland and Walt Disney World Resort are some of the most visited amusement parks on the planet, it would make sense for the debut of Star Wars: Galaxy's Edge to attract huge numbers visitors. In the four years since the project was first announced, Disney has clearly found ways to accommodate expected crowds, with presence in the now-open Galaxy area on the edge of Disneyland ultimately lighter than expected. Disney CEO Bob Iger recently addressed the factors that went into these figures, which seemingly are part of the process.

"I think a number of things have happened," said Iger during the broadcast of the Disney Q3 FY19 results for profit. "First, aided in part by some of our efforts, there was a huge concern on the market that there would be a huge crowd when we opened the edge of the Galaxy. So some people stayed away just because they expected it wouldn't be a great guest experience."

Not only were the expected crowds a deterrent to potential guests, but there were also price increases that made access to the Galaxy Edge more expensive.

"At the same time that was happening, all the local hotels in the region, expecting a huge influx of visits, raised their prices," said Iger. "So it just became more expensive to stay in Anaheim. In addition, we raised our prices, raised our daily fare, so if you are thinking of a local visit, we have raised the price of a one-day ticket a year ago significantly."

Fans have known for months that the parks were intended to open in 2019, with surprising Disney fans earlier this year revealing that both parks will have soft openings that would require reservations before the official openings of the parks. This not only relieved some of the crowds, but both parks opened without all their attractions accessible.

Star Wars: The Galaxy End is officially open in Disneyland and opens at Walt Disney World on August 23. The second attraction, "Star Wars: The Rise of the Resistance," opens on December 5 in Orlando and January 17, 2020 in Anaheim.

Are you surprised by these lower park attendances? Let us know in the comments below or hit @TheWolfman on Twitter to talk about all things Star Wars and horror!

Have you still subscribed to ComicBook Nation, the official podcast on ComicBook.com? Check it out by clicking here or listening below.

The crew returns for Episode 53 and there is much to discuss over the weekend. We look at Hobbs & Shaw, the new Call of Duty: Modern Warfare, and discuss whether DC Comics will succeed at AT&T. We also have a new revelation and news about the Marvel crossover – all in today's #ComicBookNation episode! Be sure to subscribe now so you never miss an episode!