– Rounded in sediment: "Complex life may have evolved earlier than thought 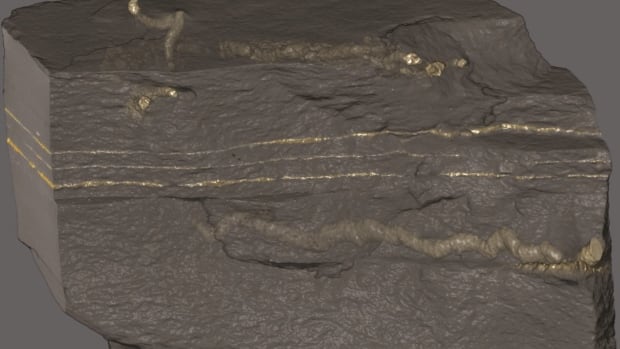 A closer look at some unimaginably ancient fossils suggests that complex life may have developed much earlier and faster than scientists had previously thought.

"If these are complicated forms of life, what they are saying to you is that evolution has happened much faster than we think," said Kurt Conchauser, one of the authors of paper, saying that in the mud the braids are tingling tiny, mucous-like. about 2.1 billion years ago.

This will repel the date on which the complex life appeared for about 1.5 billion years.

Traces in the sediment

Those fossils, the longest of which would have been shorter than a paper clip, have been known for years, Konohauser says. Everyone thought they were still – so far.

"We provide evidence that these things have actually moved," said the University of Alberta professor on Wednesday.

Researchers, using new techniques, found what they say is that there are traces of seabed sediments that would be rich in bacteria that the body has probably fed.

"You have small pitchers in the sediment. Whatever it was, it moved up and down, pushing the sludge out of its way. They're looking for something to eat.

Scientists studying the young land say the bacteria begin to fill the atmosphere with oxygen about 2.5 billion years ago. But about two billion years ago something happened that reduced the levels of this vital gas to what was necessary to maintain a life of enough complexity to move alone.

"We really do not know what that is.

It was supposed to replace that oxygen. That's why the current theories suggest that complex life did not emerge about 600 million years ago when self-propelled multicellular animals began to appear in the ocean.

But if Conchauser and his colleagues are right, complex life develops much earlier. And it happened quickly enough to happen in this window between the atmosphere that developed adequate oxygen and whatever happened to remove it.

There is no reason to think that everything we see today existed in the past. We have had massive disappearances throughout history. Why then do we not disappear massively?-Curth Conchauser, professor at the University of Alberta

What were these forms of life? They were not complex enough to be real animals, but they moved too much to be plants.

"We do not really know what this is," said Conchauser.

He suggests that they may be like modern slime forms that can survive as single-celled organisms, but sometimes they are united in the so-called snail phase to go from place to place in search of food.

In these ancient seas would have formed dense mats of bacteria before there were any fish to prune them. And that's where Conhauer's fossil creatures live.

"These little creatures move, eat organic carbon and use oxygen."

While, said Konohauser, the atmosphere lost its oxygen. The chances are that the beasts have just disappeared – a primitive tree of life cut down like a sapling.

"There is no reason to believe that everything we see today existed in the past, we had massive disappearances despite the story, why did not there be mass extinction?"

All this has been a long time ago, and even rocks dating from so far are rare. Theories are all we have, Konhauser said.

"We do not really know, all we can do is speculate."