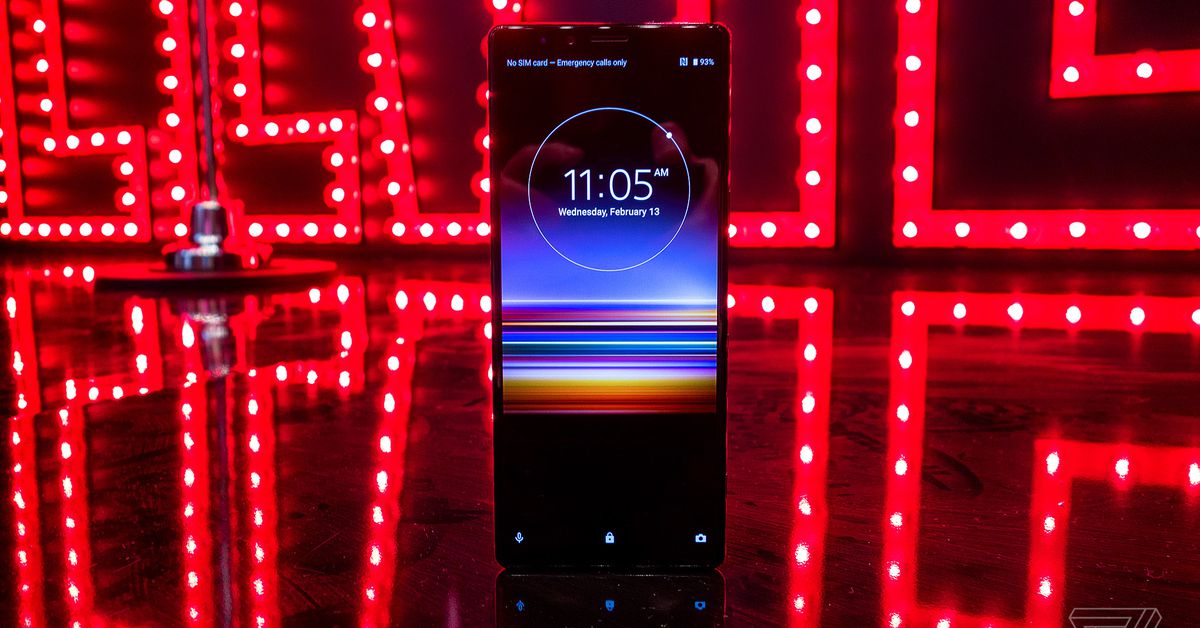 Sony has long struggled to notice its phones at sea on the best Android devices so at MWC 2019, the company is trying a new strategy to make its phones stand out – literally – featuring ultra-high 21: 9 displays . This starts with the new Xperia 1 flagship.

Xperia 1 is the successor to the Xperia XZ3, which Sony released last fall. But as the name suggests, Sony looks at it as a chance to start with the new brand on its mobile phone, starting with a new design centered on this very, very high display.

And do not be fooled, Xperia 1 – along with the more economical Xperia 10 and 10 Plus, which will also have 21: 9 displays – is a tall glass of water. The screen itself is a 4K HDR OLED panel (probably the first on a smartphone) that is measured at 6.5 inches. The key thing here is this aspect ratio; Of course, there are many screens with a diagonal of 6.5 inches, but Xperia 1 is higher than all.

There is nothing, although there is a panel on top. Counting that and the body of the phone, the entire Xperia 1 measured a height of 6.57 inches to the point where the tip of the phone actually comes out of the pocket of my jeans (for comparison, it's almost one inch taller than the iPhone XS, which is 5 , 65 inches tall).

The long display is certainly distinctive, something that is not true for many of Sony's forgotten phones. But what actually leads you, in practice?

For this, Sony has several answers. The first is simply more. Much of the content of our phone is usually displayed in vertical lists, such as text messages, emails, Instagram feeds, and so on. Higher screen means you can read and view more things at the same time.

Sony also focuses on multitasking, with the idea that you may have a second app attached to the top of the screen (like a map) while still using a second app that will be full screen on a smaller phone beneath it.

Finally, the focus is on watching videos and playing games, which sounds great on paper but is a bit more practical in real life. Plenty of movies are shot in cinematic proportions, which should look great on the high screen. But the content people like to watch on their phones like YouTube is usually not – which means you will encounter many black bars. Sony also works with partners on versions of similar games Fortnite and Asphalt races to maintain the higher screen, but games that are not optimized will not take full advantage.

Of course, the Xperia 1 is not just a screen, and the rest of the phone comes with state-of-the-art specifications: on its back there is a triple system with a trimo of 12 megapixel objects – 26 mm wide. lens (with OIS), 52mm telephoto lens (also with OIS) and 16mm wide-angle lens. There is also the required Snapdragon 855, 6GB RAM, 128GB storage and waterproof. Sony also has a side fingerprint reader, which is disappointing, given that many of its competitors have moved to readers embedded in the screen. Though Sony has not been offering a fingerprint reader in the US for many years, it's nice to see it here.

Although the Xperia 10 models are definitely budget phones with a much cheaper feel than Xperia 1, I almost prefer the design of cheaper handsets that have almost nonexistent chin on the bottom in favor of a larger panel at the top.

Sony will not let us try the Xperia 1 past the lock screen (all I can tell is that the glossy back is an absolute fingerprint magnet and the wallpaper looks great), but we still had some time with Xperia 10 and 10 Plus . Though not as powerful or tall as the Xperia 1, they have a good idea of ​​what it is like to use such a great phone.

Tall screens are definitely something that requires some accustomance – I have pretty big hands and it was a serious stretch for me to get to the top of the display. Sony supports a one-handed operation that reduces the entire operating system in the corner of the display, accessible by double-tapping the start button, and feels as a primary function, especially for smaller hands. On the other hand, you can really tone up the content on the screen and it's easy to see the complaint.

Xperia 10 and 10 Plus will be released on March 18, and the Xperia 1 flagship will be released sometime late in the spring. No prices are announced yet, but you are expected to hear more from Sony in the coming days.