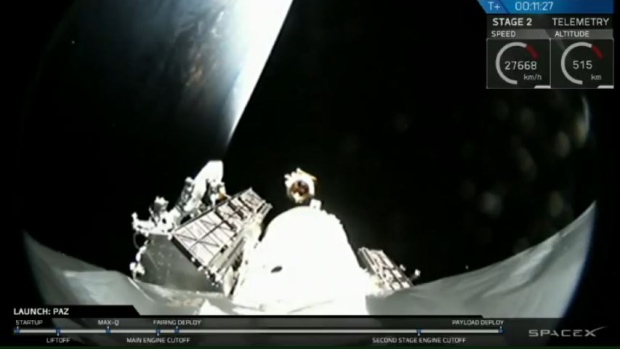 The Elon Musk Space Research Corporation asks regulators to approve radio links with spacecraft that they plan to launch next month, a key step in the race to seal the globe with thousands of low-orbital communications satellites.

SpaceX's first group of satellites will be released in early May, and the company, in application from April 5, asks the Federal Communications Commission to allow six land-based stations scattered across the US to communicate with the spacecraft.

Stations can help control satellites "in the unlikely event of a performance problem," says SpaceX in the document that does not identify what problems might arise. The authority is needed because the FCC's regular licenses do not allow communications with a low-space spacecraft before they reach their assigned positions, SpaceX said.

The demand is part of a boom in private investment in space and activity fueled by the race to create a computer and communications envelope for data surrounding the Earth. Current satellite orders will increase the amount of hardware in orbit around the planet at least five times over the next few years.

SpaceX won the FCC's approval in October to manage a constellation of 7,518 satellites in addition to a pre-approved 4,425 orbital fleet. Since then, she has asked to manage 1100 of the satellites in lower orbits.

Satellites will provide Internet services to antennas that can be placed in hospitals, schools and homes in areas that are difficult to access with fiber optic cables.

The demand for lower orbits remains pending at the FCC, where he met the opposition of the competing satellite company, Greg Wyler of OneWeb Systems Inc. There is no reason to approve the request for communication, apart from the deadlines set by SpaceX.

"SpaceX is actively using the potential danger of its uncontrolled spacecraft as a stick," says OneWeb. It states that the basic application for SpaceX modification "has encountered widespread opposition on issues ranging from increased radio frequency interference to problematic orbital debris."

SpaceX has told the FCC that these objections are "frivolous" and "look more like a last effort to delay the competitor to initiate the process that will deliver true broadband services to millions of Americans in underdeveloped and underserved areas."

Tina Pelkey, a spokeswoman for the FCC, declined to comment.

To contact the reporter on this story: Todd Shields in Washington at [email protected]

To contact the editors responsible for this story: John Morgan at [email protected], John Harney