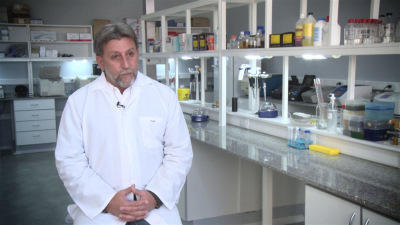 In many people, vaccination causes a cocktail of atavistic fears. Injury to injections, concerns about needle sterility, or even the phantom of cross-infection usually appear behind the syringe. Hugo Luchan, Ph.D. of Chemical Sciences of the National Council for Scientific and Technical Research (CONICET) and director of the Center for Research and Development in Immunology and Infectious Diseases (CIDIE) in Cordoba, developed a cure for all these ills: a platform that will Every antigen in the vaccine for oral administration – via pills – can replace traditional injections and would mean the end of the nightmare.

To date, the only oral vaccine available on the market is Sabin, which was developed in the 1960s and applied against Poliomelitis in children from 6 months to 5 years of age. The platform developed by Luján, recently released through the publication of an article in Nature Communications, can be used to generate oral vaccines that fight each infectious agent, even against tumor cells.
As is logical, the emergence of this development has a chain of previous developments and more than twenty years of dedication in the study of mechanisms for adaptation of human and animal pathogenic parasites. To understand this, we need to first review how traditional vaccines work. The mechanism is very simple: by injecting, enter the body a small amount of viruses or bacteria that "teach" the immune system how to recognize, protect and attack micro-viruses or bacteria when they ultimately invade.
Unlike injectable vaccines, the main drawback of oral vaccines is that they are readily digested in the intestine by digestion. However, Luján and his team are pioneers in the generation of an oral vaccine against Giardiasis in 2008, a diarrheal disease that primarily affects poorly developed countries caused by a single cell microscopic parasite that lives in the small intestine of humans and is transmitted to the stools of an infected person or animal.

How did you come to this discovery? The Giardia lambia parasite is specific because it has an adaptive mechanism called "antigenic variation" that acts as a "cover": through this process the parasite has the ability to continuously change its basic surface molecules (called "variable proteins"). on the surface or VSPs), which allows it to avoid the host's immune response and can therefore remain chronic in the gut of a human or animal. That's why Giardia was a parasite that was so difficult to fight. Lujan achieved for the first time that the entire repertoire of purified natural VSPs is able to provoke a protective immune response against all possible "disguises" of the parasite in the form of oral, validated in the laboratory and then in domestic animals, allowed CONICET to obtain a license for an international company.
With this patented development, Luhan met with colleagues from France and invented a new idea: to develop oral vaccines to prevent other infectious agents by adding Giardia VSP proteins to antigens that, due to their protective properties, will allow oral vaccines to resist the intestine and are not degraded. Meanwhile, colleagues from France have contributed to the development of VLPs, particles that stimulate the immune system because they mimic the structures of viruses but do not have genetic material, therefore do not become ill, the decoration of VLPs with VSPs and antigens they want to fight, like flu, Zika, tuberculosis, lead to effective oral vaccines in animal studies. This combination is the revolutionary platform created by Luján with his colleagues and team, with the special involvement of researchers Marianella Serradel and Lucia Rupil.

"Virus-like particles are like the framework to which I can add each molecule to generate an immune response against it." But at the same time, proteins from Giardia surfaces are added to protect them in the intestines. Giardia lives in the gut and nobody knew why he did not digest as any food, we began to see these surface proteins that helped us generate this vaccine against Giardia, and we saw that if we put them out, these particles did not get worse "Says Luhan. "Although it looks complicated, it's an easy technique to perform and without the need for very sophisticated equipment," said CONICET's researcher.
"We produced these Giardia proteins in the lab, we subjected them to different digestive conditions, and we saw that all of these proteins were resistant, so they are excellent for protecting these viral particles to which we can attach some vaccine antigen. This is the platform, "he adds. We have already tested it with antigens from influenza virus, respiratory syncytial virus, tuberculosis and music, and these antigens do not break down and generate a major immune response not only in the mucous membranes, but most cells enter the body. infectious agents, but systematically. "
Lujan adds that "during our studies, we also observed that when injected into mice vaccinated against a particular antigen and tumor cells expressing this particular antigen, tumors did not develop, which occurred in unvaccinated animals or in those that were not vaccinated, vaccinated with particles without VSPs, even in some tumors, the vaccine worked in a therapeutic way. "
Among the benefits of oral vaccines, Luján points out that "because these oral particles do not require cold for transport or storage because they include Giardia proteins – which maintain changes in temperature and pH both inside and outside the intestines – they do not require chain of cold or some special logistics, they also do not need trained staff, they do not present a risk of cross-infection, avoid the risks associated with the use of syringes and needles, have no expense, they are painless, non-invasive techniques, they are appealing for application in mass vaccination programs personalized. "
For Lujan, "the opportunities open to this platform are huge and we can generate important resources for the country." He concludes: "We have never imagined that we will find these proteins useful outside the Giardia vaccine. Science is such: one can not predict what it will do. The next step will be to conduct clinical trials in humans.

In the trials, "the most important thing we found was that once we vaccinated mice orally with these viral particles containing influenza virus antigens, very easy to generate and cheap in the lab, these antigens did not degrade." we saw that they activated the immune system by binding to a specific receptor (the TLR-4 receptor) and once vaccinated, we measured their response: the mice vaccinated orally were protected from contamination with live virus in 100%, while mice that were vaccinated by injection were protected by 80%, so we demonstrated that our oral vaccine by vaccination in the upper intestine and not in the colon is better than vaccination with injection.
With this response they use the platform for therapeutic vaccines against various cancers. "I'm a wanderer, I'm doing futurism according to the results, we have them only with animals, but that opens the door for these studies." For example, those of cancer because, once they discover a tumor that a biopsy has been made and analyzed, we know what their specific antigens are needed for, and with this system we can make a personalized vaccine for each patient. Ljujan is advancing. (Source: CONICET)

Not only is it not uncommon, but the need for needles, or white-eyedropia, is one of the main reasons for psychological help; in fact, some studies claim that up to 10% of the population suffers from this phobia.
As a phobia, it belongs to the group of anxiety disorders. This is an intense, irrational and constant fear of some situations where there may be a phonic incentive, needles, but also syringes and the possibility of injections, as well as trypanophobia or fear of injections.
These fears develop from a type of associative training called classical conditioning after a traumatic event. For example, after a bad experience with needles. But phobias can also be learned through observation in what is known as the vicar. This means that one can see how the individual is screaming when they will give him an injection and may develop a strong fear of needles.
Although this type of phobia is very common, it also has a high success rate in terms of treatment, according to research. There are different psychological therapies that work, but the most used is cognitive-behavioral therapy. The most effective are relaxation techniques and exposure techniques.