'Markets doubtful' in Argentina: Macri blames the possible return of Kirchner to a new international crisis 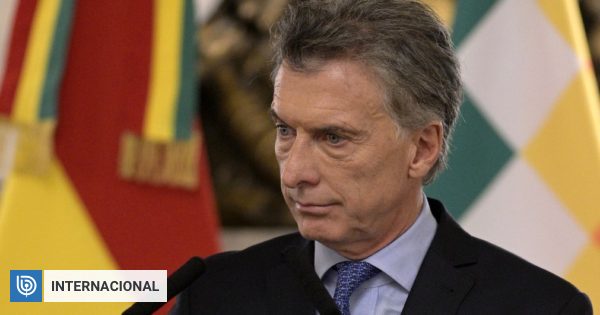 The economic crisis affecting Argentina since 2018 had a new episode this Wednesday and worsened on Thursday, After the closing of the stock market, the dollar will rise and the rise in the risk indicator will increase.

The Argentine currency depreciated by 2.62% on Thursday compared to the previous day, reaching a record of 46.13 pesos per dollar, escalating, which only slowed when the Central Bank raised from 68% to 71% of the reference interest.

What is added to the black day on Wednesday when JP Morgan's risk indicator closed at 963 basis points, almost 11% more than the previous day, and peaked at the admission of the president Mauriceio Macri (center to the right) in December 2015

Macri's government has defended its economic policies and pointed out that this new devaluation of Argentina's peso is due to the high likelihood that Cristina Fernandez will be re-elected as president of Argentina in the October elections.

"The market sees this in this sense: the continuity of the kambiemos or the return of the kirchnerism. This predicts the market, the change that we have started, or we go back to the leadership of Peronism, "said Makri, referring to the Infobae portal.

According to the president, the markets are more volatile than the IMF or other agencies that look only in the short term and that Fernandez's return scares investors.

Yesterday and today, they doubted our conviction to continue along this path. Many believe the past is better, but the majority of Argentinians do not want to return. That noise was caused by this, "he added.

The new turbulence on the stock exchange is happening when it remains six months to the presidential election on Oct. 27, when Makri will try to resume his mandate by 2023.

"Macroeconomic stability has not been achieved, the financial – less. The latter will give peace to the government in a pre-election year. The dollar rises again, although the interest rate is over 70% per annum, said Piggy.

Argentina froze the exchange rate fluctuation, which was adjusted each month on April 16, and set a floor of 39.75 peso per dollar and a ceiling of 51.45 peso set by the end of the year.

The Government considers that devaluation of peso is the main inflationary factor. Until now, in 2019, the peso has lost 15.82%.

The Argentine economy is in recession and with the financial assistance of the International Monetary Fund, which negotiates in 2018 a loan of $ 56,000 million in three years.

Inflation reached 4.7 percent in March and amounted to 54.7 percent on an annual basis and the government announced last week a package of emergency measures including a six-month freeze in commodity prices and utility tariffs. measures that have led to more distrust of the markets.