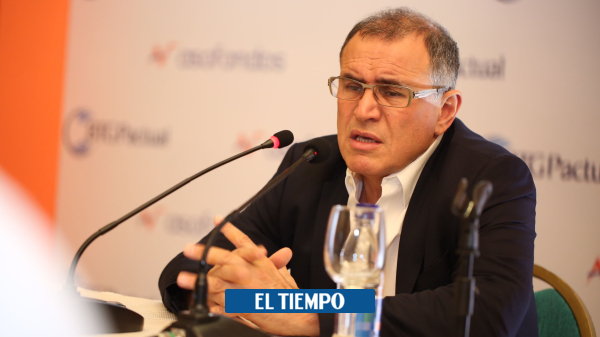 In the midst of the intense fluctuations that global and regional markets are experiencing these days, due to the US-China trade war, and other factors such as higher yields on US government bonds and the performance of Europe and China, economist Nouriel Roubini, a professor of economics at New York University, points out that the risks to global growth go beyond trade.

In this context, the expert invited this year to the annual meeting of the National Association of Entrepreneurs (Andi), in dialogue with EL TIEMPO, warned of the possibility of extending risks to the public and private sectors, which could lead to an increase in Debt in dollars.

(You may be interested in: Fear of recession is mounting in the face of a trade war between China and the US.)

Is trade tension the only risk of a global recession?
I would say that this is a risk of tension between the US and China. The trade war, the monetary war, the technological war, and obviously the consequence of the geopolitical cold war, is a risk that can be generated and can be felt in the public and private sectors. But the problem is that credit instability can again occur.

The risk between the trade war and the technological war can be this big shock, which can cause a problem within the growth and lead to a global economic recession

And if there is no global growth, these loans may become even more volatile. In principle, the risk between the trade war and the technological war can be that big shock, which can create a problem in the context of growth and generate a global economic recession.

I do not want to summarize, but there are some corporate sectors that have a lot of debt in dollars and in these months the currency of these countries can increase the debt and the problem. So there are many channels of transmission if we have a global recession. If we have a global recession and the US and China are sneezing, other countries have something worse than the flu.

How quickly can foreign fears from countries like Colombia be affected by these fears?
If global growth continues, then Colombia will recover. But do not forget that it is also an exporting country and if there is a war between the US and China that pressures the price of oil in dollars, it can affect the demand for oil.

(Additional: Trump sets out a law that allows companies to discriminate on the basis of religion and gender)

And if the conflict is not only between the US and China but there is a complete war between the US and Iran, oil prices of up to $ 100, $ 120 or $ 130 per barrel can be generated. In these scenarios, Colombia may be useful, but it would be temporary. The surges in crude oil prices generate short-term benefits, but this is not something that can be sustained.

Colombia depends not only on global oil prices, but also on US financial conditions and what happens to other policies in that country

Colombia depends not only on global oil prices, but also on US financial conditions and what happens to other policies in that country.

How can a country like Colombia move properly in these trains of instability and fear?
There is not much we can do in the short term. It depends on what's happening in the global economy.

Colombia depends too much on foreign and oil exports. National production of other goods may be generated so that they can be exported. This could generate other solutions as well as innovate more at the digital level and try to diversify the economy and make it less dependent on oil for its exports.
The world may go up or down and you may be affected in the economy, but if there is better policy movement and better economic governance, we could logically generate some resilience against the backdrop of change. The Colombian economy is much more stable in this regard.

How can Colombia protect the 3 percent rise in tension and fears of recession?
I do not follow Colombia a lot, but I think that there is a sense of improvement, and we need to look at how tax collection is done and how more friendly markets are generated in order to generate a more positive sentiment in the corporate and business sectors.

With that in mind, we could see that more confidence can be created in the coming years. And that would not logically affect growth.

Is the geopolitical situation already noticeable with a decline in investment?
Perhaps Colombia has had better results thanks to government policies that have helped corporate growth over the past few years.

Things can be done to improve the financial climate, no matter what is happening in the world. But if the world goes into recession, it can lead to negative impacts, which can be reduced by appropriate policy decisions.

We need to try to generate those policies that reinforce companies' sense of confidence. An economy like Colombia can be logically influenced by a global factor. However, the generation of good policies can continue with this growth.