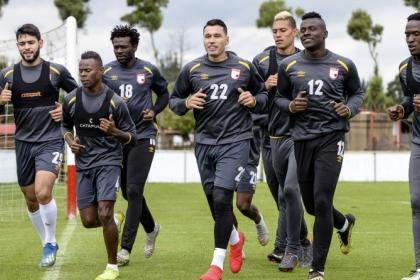 Independiente Santa Fe is working in its pre-season in the new process of Argentine coach Patricio Camps, who has found a young team who wants to change the sporting situation he presented during the first semester and hoping the board of directors will confirm. in the coming days the first reinforcements.

Albirrojo Square was interested in negotiations with Atlético Nacional. And although the capabilities of Juan Pablo Ramirez and Juan Pablo Nieto fell because the camps did not interest him, the doors of other operations with the Antioch club were not closed.

After a broad estimate of what is in Colombian football, what can happen abroad and the departure of the players in Santa Fe, Patricio Lams demanded the hiring of two Argentinian players, one playing in Mexico and another in the second division of Argentina.

One of them is Pablo Cesar Barientos, a 34-year-old attacking midfielder who plays for the last time in Toluca in the Aztec league. The city of Toluca is at a height very similar to that of Bogota. He played 13 matches this semester (12 as a starter) between the league matches and the Concachampions.

The experienced midfielder has experience in Russia and Italy; He was part of the Argentine U-20 team and in his country he played with San Lorenzo and Estudiantes de la Plata.

The other person who would get to the red-and-white photo is Federico Anselmo, a 25-year-old striker who played last year at Kilmess, Argentina B. There he played 22 games and scored 9 goals. He was a striker of the center and also wore jerseys of Argentinos Juniors, Unión de Santa Fe, Atlético Rafael and Estudiantes.

From the Colombian side, Santa Fe is ready to end the signing of midfielder Daniel Giraldo, runner-up with Pasto in I League, who played 26 matches with Narinjo's team.

A study was made by Andres Felipe Amaya, a skillful midfielder Atletico Will, but the opita team was not very open for an operation in which a loan and exchange were offered by two players from the cardinal's team.

As for the exits, they are no longer in Santa Fe Johan Arango, Carmelo Valencia, Jose Moya, Arle Rodriguez, Mateo Cardona and Diego Martinez.