PHOTO .. ​​Popular campaign in mosques and hospitals Luxor in preparation for the initiative "100 million health" 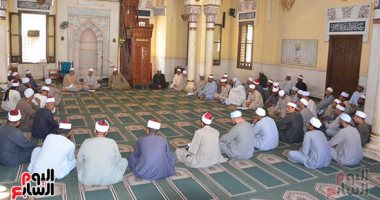 Dr. Abdel-Gavad, Deputy Minister of the Ministry of Health in Luxor, revealed that the Directorate is taking serious steps in preparing for the implementation of President Abdel Fathhat al-Sisi's "100 million healthcare" initiative to eliminate the C virus and early detection non-communicable diseases "within the second phase of the management phase, which will last for two months from December 2018 until the end of January 2019 and is currently being processed in accordance with the directives of Governor Luxor Mustafa Alaham with the various executive agencies in the province to implement the initiative and to meet all the necessary needs and overcome the obstacles.

Dr. Abdul-Yavad explained that the mobile teams will be located in civilian settlements by pointing out that citizens will pass the C virus test. The same sample will randomly analyze the sugar and measure the weight and length of the human . At 18 years of age and over, he is allowed to connect to the national identification card for the closest research site to initiate the detection of C virus and leaky diseases.

Dr. Hisham Al-Rawi, Director of the Technical Service of the Health Directorate of Luxor, said the Health Directorate has begun its opening rounds on the initiative of President Abdel Fattah Al-Sisi to eliminate the C virus and early detection of non-communicable diseases (from December 2018 to January 2019) that the tours began in the center of the city of Koran, in the presence of the President of the Qur'an City Council, General Saud Badry and the MP Mohamed Yasin and the presence of a large number of people and civil society and Muslim and Muslim clerics. And non-communicable diseases such as "pressure, diabetes and obesity" in the presence of the President of the Center and Zinai Mohsen Rabi, Auhaf's representatives and social affairs, NGOs and village leaders, and the participation of people and the social well-being. For citizens aged 18 years.

Dr Isham al-Ravi said on Seventh Day that the initiative will be covered in the entire Luxor district in the cities, villages, villages and Al-Hawaii, where the population in the province of Luxor is about 1.09 million citizens and the share of women – about 49% of the province's population – Including 714.3km of inhabitants, highlighting that the awareness campaigns of the initiative reached thousands of visitors in the Marjerjis Mount Rizeigat Monastery and organized a symposium during the annual celebrations in which thousands of Coptic brothers from the whole republic were identified by the danger Vrce C and Campaign Definition Because of the need for everybody to carry out a comprehensive survey where the Deputy Secretary supported the Information and Education Directorate to launch campaigns across the province.

In the city of Esna, Dr Zakariya El Hadad, Director of Health at Esna, said that a number of doctors and nurses are scheduled to take part in the December and January activities. Practical training for physicians and nurses participating in campaigns, with Dr. Ahmed Muharam, Dr. Amir Mohammed Maki Lamlom and Dr. Amr Taoufi Shabib, a medical team in charge of working in the city of Esna.

Dr Zakariya al-Khadd added that the preparations for the 100 million health campaign for comprehensive citizenship research to maintain their health under the control of Mohamed Sayed Sulayman, the head of the city of Esna and village leaders, are under way. The city is equipped with data from civil society, the Citizens and the Executive Council, involving young men and women, during which the initiative will examine over 300,000 citizens in Asna and will have 83 staffs in all units and youth centers and hospitals.

As for the men in Auf in the province, it was decided to dedicate the second sermon from Friday to the end of next January to raise awareness and awareness among citizens of President Abdul Fatah al-Sisi's initiative, where Sheikh Abdullah Mohamed Abdel Al , chief inspector at the end of Esna and Sheikh Mansour Sakr Director of the End of the City of Esna Disclosure of the Initiative in the Friday Sermon and the distribution of part of the mosque lessons for free analysis of the initiative and explanation of all details in cooperation with the Provincial Health Directorate to serve the initiative and the citizens.

Sheikh Mansour Sakr said the Auhaf men's campaign had already begun in Friday's second sermon. The initiative, sponsored by President Abdel Fatah al-Qashi, is being discussed to ensure the health of citizens across the province of Luxor and the other Egyptian governors for two full months. But in the mosque in the city of Esna Sheikh Mohammed Hussein Usif gave the second sermon last Friday speech about the importance of the President's initiative and how to cooperate among citizens to look at the initiative.