Watzmann: The woman falls 50 meters in depth – a 12-hour rescue 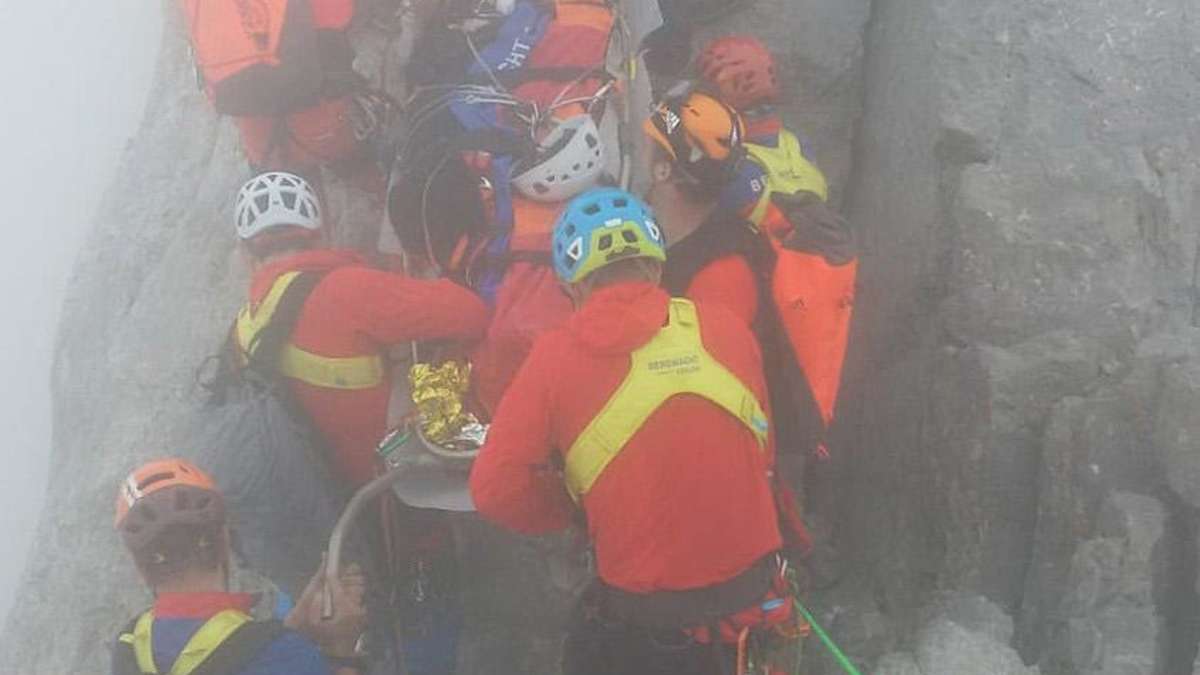 A 22-year-old tourist from Brandenburg has fallen to 50 meters deep in Watzmann. She survived. The Savior wrote part of the history of mountain rescuers.

Ramzau – Zero visibility, the rescue helicopter has no chance of getting to the scene of the accident. The mountain rescue team should be on foot. On Saturday morning 22-year-old Brandenburg's crossing of Watzmann exceeded 50 meters in depth.

She was wounded in a stone field. But she was miraculously alive. Two climbers who watched the incident deviated to the scene of the accident and provided first aid. At the same time, the rescue circuit is triggered.

But the cloud grew deeper into the mountain. The helicopter was unable to fly directly to the scene of the accident. The mountain rescue team walked to the site of the crash.

The recovery was extremely expensive. The young woman had to be rescued on the steep terrain with a stretcher and a cable door.

"We have made history with this salvation""says the dispatcher later. Among other things, 37 men and women from the Ramzau, Berchtesgaden and Markschelenberg mountain guards and four helicopters participated in the 12-hour, very difficult mission.

The message of the full length BRK Berchtesgadener Land: A 22-year-old tourist from Brandenburg survived Saturday morning shortly after 8 hours of the intersection of Watzmann between Hocheck and the middle of the peak with a 50-meter crash through a stepped snow field.

Three other climbers, two of whom are mountain rescuers, hanging to the victim and giving first aid. A heavy mist prevented more than eight hours that the heavily injured could be thrown out by a helicopter, so a large mountain rescue convoy transported the young woman lying diagonally up to the ridge and then the rope insured through the Hocheck open area to the Watzmannhaus until finally shortly after 4:30 pm the Edelweiss 8 helicopter picked up the patient and the ambulance with the winch and managed to fly to Kyuroint.

When the first emergency call arrived shortly after eight hours, the crew of the Christoph 14 rescue helicopter in Traunstein could not locate the incident at first, because the Wozmantrant was already in the mist and the cloud slowly sank further. Then the crew brought two survivors of the Berchtesgaden mountain with extensive equipment from the Sneinwalk to the ridge and dropped them under a steep upswing to the midpoint pointing over the runner. The rescuers continued to climb towards the central peak, managed to locate the incident in consultation with other mountaineers, then quickly escaped to the snow field on the eastern side and provided the young woman with emergency medical help. The direct approach to the scene of the accident for the rapid removal of the seriously injured is no longer possible due to the thick clouds.

Waltz Drama: The helicopter is trying to get closer – but the clouds are too dense

At the same time, the mountain guards Ramzau and Berchtesgaden move their intermediate landing sites from the valley of Ramzau and from Schneibelk higher to Kuuroint, resulting in kerosene trailers from Berchtesgaden and Traunstein. First, Christophe 14, and then the crews of the Edelweiss 2 and Edelweiss 8 helicopters brought other forces of the Ramzau, Berchtesgaden, and Markstellenberg mountain ranks to the mountain and put them as close as possible to the mist line that continued to sinks almost to Watzmannhaus and, despite several promising short-term gaps, prevents any direct rescue of the patient.

The mountain rescue team and the first respondents built a diagonal elevator and transported urgent medical help from Ramsauer Bergwacht, and the Berchtesgaden paramedics first delivered 22-year-olds lying about 40 feet vertically to the ridge. The rope is insured through many open terrain that brought mountain rescuers from 13.30 to Hocheck and then down to the Watzmannhaus, always in the hope that the mist clears and a rescue flight possible. The other rescuers, sent by helicopters, approached the rescue team, threatening dangerous areas like the tip, and bringing the patient with the extra equipment needed. "Emergency medicine was transported by the Berchtesgaden District Hospital to the fog line and then, so to speak, brought the relay led by our people to the patient," says Rudi Fundt.

Shortly after 2:00 PM Ramzau's Task Force alarmed all the forces of the mountain guards Ramzau, Berchtesgaden and Markchellenberg because the cloud situation did not improve and the seriously wounded had to be transported away from the ground.

Around 15:00, the carrier with the woman arrived at Hochek chalet, meanwhile, a federal police helicopter also landed in Kurotin with the help of a rescue winch that had to be taken to the clinic. The Bergwacht Crisis Intervention Service (KID) took care of the affected satellites, including the father and sister of the dead, who descended with mountain rescuers even to the Watzmannhaus.

Dramatic rescue of Watsman: There is also a thunderstorm in the afternoon

At about 4:30 pm, When a thunderstorm had already begun over Hagenburg and it started to rain, the mist had opened so hard that Edelweiss 8 climbed up from his stay at the Vatsmannhaus, the patient and one of the two emergency doctors from the mountain with the winch. can take and take off to Kühroint.

We went there with the Federal Police's helicopter directly to Neuro-clinic in Salzburg. Edelweiss 8 flew back to Watzmannhaus and from there arrived at the shuttle traffic of the dismantled forces and even the equipment left on the middle peak back to Kühroint. Since the crew could not fly home due to time, she took down Rudi Fende in a guesthouse in Ramzau. Sophisticated use lasted until 20 hours, where, in addition to the three mountain guards from the inner area, and very well-trained first aid to the mountain rescuers Sulzbach-Rosenberg, the Glassee Mountain Emergency Assistant, Altwiging Bergwacht, and the Mountain Rescuer Traunstein attached kerosene. were.

Fendt: "I have been with Bergwacht for decades, but I'm still being handled because such a task is a story because all the actors have done incredible things and worked perfectly hand in hand so that the young woman survives despite the extremely difficult conditions. We did our best and wished her and her family luck – it will be the culmination of all of us if everything goes well in the long run!

During the rescue of Watzmann: tourists are lost in the vicinity

At around 13.50, during a major rescue operation, an outrageous man from Coyannege's Eastern Bank needed the help of the mountain rescue team: Edelweiss 2 led two mountain rescuers from Berchtesgaden from the east coast of Kyüre, who found the man descended the slope terrain, and then to Lakeside, where the BBC's water clock took the two sailors by boat. During the rescue, two other people on the East Coast needed local knowledge of the mountain rescue because they could not find the way.