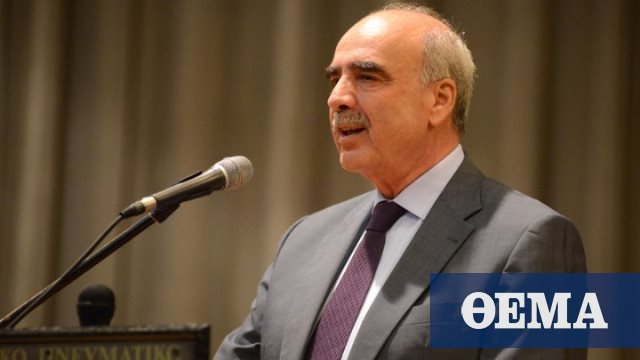 Patagonism towards extremists and populism opposed former New Democracy President Vangelis Meimarakis to his speech at the opening ceremony of the party offices in Polikastro Kilkis.

"We believe in justice, equality, the rule of law, social justice, development for all because we are patriots, we are not extreme, we are not populists, we do not hate other peoples and other countries, it loves its own country and respects others, but asks the others to respect our national identity, the conditions and the rules in which we live and to be able to accept them, "said Mr. Meimarakis.

He also stressed that Christian doctrine is a fundamental pillar of the principles and values ​​of New Democracy and notes: "ND is a patriotic, feverish, Christian-Democratic party that has specific directions, values ​​and paths, we also received the blessing of the church upon entering the position of the party offices today. The ND has as its main pillar its principles and values ​​of Christian doctrine, is the main pillar of liberalism, Greek culture and the European KOD civilization. "

Mr Meimarakis called for unity in the party and asked members and leaders to turn to all citizens, especially those who have experienced in recent years, and expressed the belief that ND is and will remain the dominant political power in and will take over again his reins, because he is the one who can secure his progress.

He pointed out that the ND had told the truth of the Greek people, but part of it was dragged by George Papandreou's "money is there", and then the country went to the sink until it was returned to the 2015 elections.

Mr. Meimarakis made a special reference to the local elections in May 2019 and referred to the many ND nomination aspirations. He said they were legitimate, but that special attention is needed in order not to exacerbate the situation and to consult the second round of ND candidates.

Moreover, he stresses, is to hold a mild struggle against municipal elections, so as not to create "injuries" that will not be able to compete in the European elections and the national elections, which is the last battle he believes will give the New Democracy government.

The offices of the ND in Poliakra, a blessed priest, greeting was given by the deputies Kilkis Giorgos Georgitas, the second Thessaloniki Theodoros Karagoulou, attended the mayor of Paionia Christos Goutenousdis and a video with the route New Democracy.

The inaugural event took place in adverse weather conditions (rain, wind, cold) and the organizers placed sheds and heaters outside the offices to protect the crowd.