India will cross with England in the semifinals 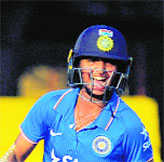 India will face England in the second semi-final on Friday after the West Indies defeated 2009 British champions by four wickets in their final group match of the ICC Women 's World T20.

India have been unbeaten so far in the tournament, winning all three of their matches in Group B. The team in form will also take revenge, having lost to England in the 50-over World Cup final last year. Defending champions West Indies, on the other hand, topped Group A with eight points after beating England in a final thriller to clash with Australia in the first semi-final in Antigua on November 22.

In the last Group A match, the West Indies limited England to 115/8 and then overhauled the target with three reserve balls, riding Deandra Dottin 52-ball 48. Dottin, who was decided by the Match Player, said: "To be honest, there is no pressure to open batting in this tournament. I know what kind of player I am. I can fight hard. I can go medium. I can drop it. It all depends on the situation. But knowing that you have a six-over Powerplay, you want to use it. "- PTI