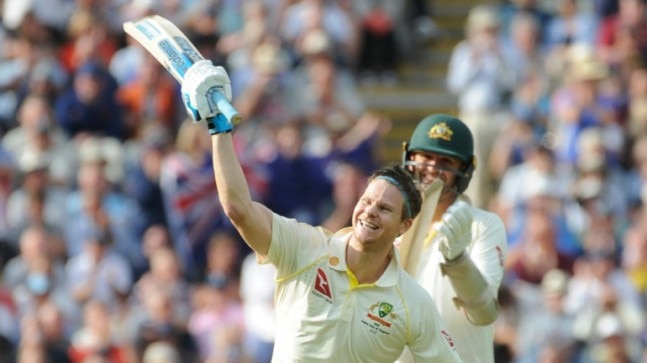 Ash 2019, England vs. Australia: Steve Smith scored 144 runs on his return to the test, while Stuart Broad struck out 5 wickets as Australia equalized to 284 on Day 1.

Steve Smith scored 144 on his return for a cricket test following a ball-tampering ban as Australia recovered from 122-8 to 284, all against England on the opening day of the Ashes series on Thursday.

England finders Rory Burns (4 not out) and Jason Roy (6 not out) confidently survived two overs in the evening session to reach the stumps at 10-0 in the first Test.

Smith and Peter Sead came to the rescue of Australia's first 88-wicket partnership for the ninth wicket in Edgbaston, then Smith shared 74 runs with Nathan Lyon for the last wicket in an unusual twist.

Smith was finally knocked down as he tried to smash Stuart Broad. His 219 ball hit included two sixes and 16 fours.

Former Captain Smith won his first test pitch and 24th Test century in just 65 games after stopping for 12 months in a tampering scandal during the third Test against South Africa in 2018. He reached his century by striking out Ben Stokes to the border, sparking a mix of boom and much applause from the Birmingham crowd.

Seed, who was selected for his bowling, struck a precious 44 before sending a delivery from Moon Ali's offspring to Joss Butler's leg.

England reduced Australia to 154-8 per tea after the visitors chose to bathe and reached 83-3 with a cloudy lunchtime. But Smith and Seed began to dominate after tea when the game resumed after a brief rain delay.

For sports news, updates, live scores and cricket scores, log on to indiatoday.in/sports. Like us on Facebook or follow us giggle for sports news, results and updates.
Get real-time alerts and all your phone news with the all-new India Today app. Download from