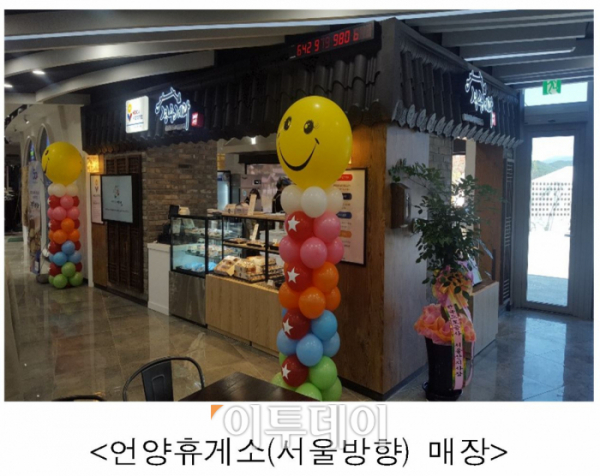 ▲ A vision of the Gyeongju social company, which was opened in the Eonyang Rest Area (direction Seoul) on the 25th of last month. (Ministry of Land Transportation)

12 social company shops will be opened in the highway rest area.

The Korean Ministry of Land, Infrastructure and Transportation and Highway Corporation announced on Monday that it will open 12 social enterprise stores in the main resting areas of the main highways this year according to the 2022 Medium Term and Innovation Roadmap for 2022 Expressway Rest Areas. Social companies refer to companies that pursue the first social goal, such as creating jobs in public services and vulnerable classes rather than pursuing profits.

Gyeongju Confectionery, the first social company, opened in Mungyeong Rest Area (Yangpyeong) from Chungbu Inland Expressway, which is operated directly by the Road Corporation in August this year. The Ministry of Land, Infrastructure and Transportation has succeeded in implementing a social company. After making an operational plan, it was extended to the entire country.

Road Corporation plans to provide various support such as hiring a social company that will be located in a resort at a much lower cost than the general store, and producing and promoting its own brand image (BI).

It also provides high-quality new jobs for low-income families, disabled people, migrant women from multicultural families, and defectors from North Korea. Those who will be responsible for manufacturing, production and sales management will be employed by full-time employees and benefit from operating profit and get a salary 20% higher than the minimum wage.

It is hoped that the socio-economic values ​​created through the resort will reach around 2 billion won per year. 44 billion KRW is paid to 44 vulnerable groups operating, KRW 1 billion is paid annually, KRW 750 million is paid for rent reduction (KRW 720 million a year), and operating income (KRW 230 million per year).

In addition, social companies will use profits for public purposes such as investment facilities, promotion of employee welfare, and community contributions to expand work.