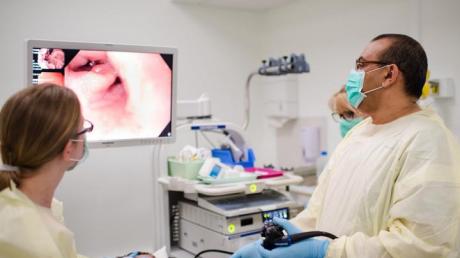 Gastric fibroscopy is a medical examination that involves examination of the esophagus, stomach and duodenum. Sometimes called digestive endoscopy, it can confirm the diagnosis and make samples.

What is gastric fibroscopy and when is it indicated?

on fibroscopy is a non-invasive technique that can explore natural pathways and internal organs. It is mainly used to study the digestive system, urinary tract or airways.

on gastric fibroscopy is carried out by a gastroenterologist, It allows you to explore the walls ofesophagus, the stomach and the duodenumIt is shown to people victims of digestive disorders severe or recurrent nausea, vomiting, abdominal pain, diarrhea, constipation, gastrointestinal bleeding, or gastroesophageal reflux. It is used to find the cause of the symptoms and to confirm the diagnosis, for example, if cancer is suspected.

Gastric fibroscopy is also performed as part of a biopsy to facilitate tissue samples, which are then analyzed under a microscope in a specialized laboratory. Finally, this medical examination is sometimes indicated as a cure during treatment, for example for injection of a substance in the case of esophageal varices.

How is gastric fibroscopy performed?

Gastric fibroscopy is usually performed under local anesthesia, sometimes under General anesthesia, The gastroenterologist introduces to the mouth of the patient lying sideways a fibreoptic, a small flexible and slim tube equipped with a mini camera and light source.

The captured images appear on a computer screen. In this way, the doctor can trace the course of the fibroscope to the digestive tract and examine the walls of the examined organs in detail in search of an anomaly.

Dengue: symptoms, treatment, prevention, where are we?

Gastric fibroscopy is a quick review that lasts less than 30 minutes, It may take up to 45 minutes if a biopsy is performed. If cancer cells are detected in the samples, additional tests (NMR, CT) must be performed.

What are the risks and complications of gastric fibroscopy?

The patient should present on an empty stomach on the day of the procedure. He must not eat, drink or smoke within six hours of the exam. Gastric fibroscopy is usually painless, There is a risk of bleeding or digestive perforation during the examination. Some patients vomit or complain of abdominal pain in the coming days. Fibroscopy can also lead to cardiovascular complications.

and can the micro-organisms present in our stools help patients to heal?