Maria Sharapova is taken down with a "savage" billboard 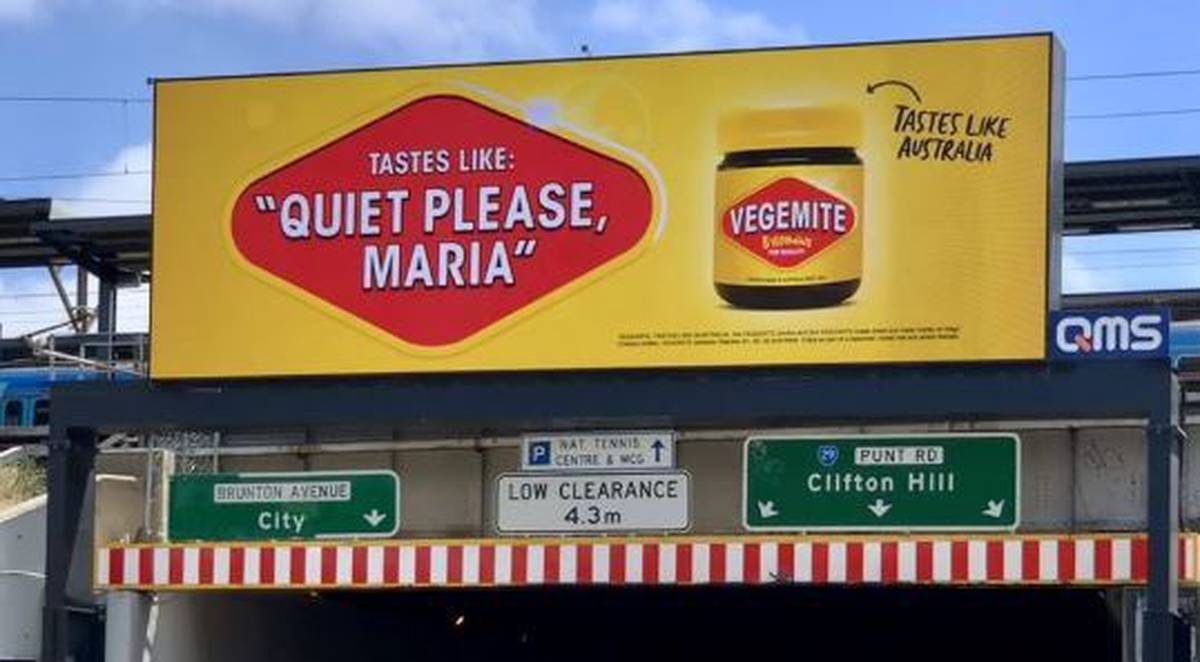 Aussie icon Vegemite encountered the bleak territory of the active pursuit of Maria Sharapova as a result of her controversial release from the Australian Open.

Skipping as the official sponsor of the tournament, as well as a personal sponsor of Australian star Ash Barti, Vegemite launched his advertising campaigns around Melbourne Park from the start of the first Grand Slam of the Year.

In addition, as in the Melbourne Park area and its branding with Barty's team, Vegemite's marketing campaign also includes billboards around Melbourne.

The decision to take a sweat against Sharapova now nourishes a social media debate as an official sponsor who actively pursues one of the biggest tournament stars.

A billboard, spotted in Melbourne, showed that Vegmitet traded its products as: "Quiet, please, Mary."

This happened after Sharapova's distinctive shouts became one of the biggest points of conversation to get out of his fourth round loss to Aussie Barty.

Eventually Sharapova was driven out of the Open, where the Melbourne crowd turned her on for seven minutes of bathing after Barry took the first set.

Before Sharapova faced Bartie, the same billboard was much more friendly to Sharapova.

"There are times when Sharapova is still hiding when Barthy hit a shot, a very obvious offer to distract the opponent, and it is terrible and, fortunately, it does not work."

Leo Shlink of Herald Sun also complained about the WTA Tour's failure to overcome the excessive grumbling, as former President Stacy Allastera would have attempted six years ago when he declared war on the slashing dispute.

"Tennis fans – those in Melbourne Park and elsewhere – hate the habit," Schlink writes in a report on the great victory of Bartley's fourth round.

"An observer waved a sign during the warm-up, saying," Quiet, Sharapova. Barti is ready to play.

"It does not matter to Sharapova, who was sobbing about almost every blow in every rally.

Veghemit was not the only company to make unpleasant things for its clients this week at the Australian Open.

Finalist Naomi Osaka dismissed her own sponsor, Nisin, on Thursday to create an animated ad that portrays the tennis star in "whitewashed" skin.

Since then, the company has apologized and ended the cartoon campaign.

"Like talking to them, they apologized," Osaka said after the semi-final.

"It's obvious to me that I'm a tan, that's pretty obvious, I do not think they did it on purpose to be a screed or anything else but I definitely think the next time they try to introduce me or something like, I feel they have to talk to me about it. "