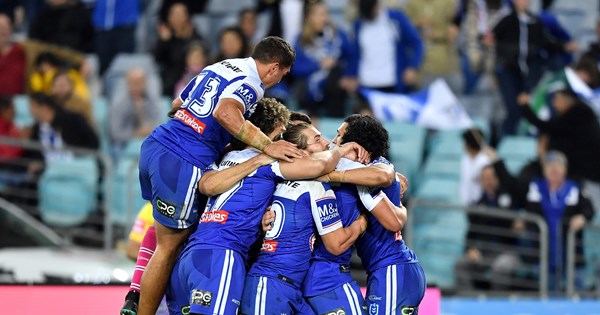 Canterbury's giant-killing late-season run has put the Rabbitohs' top-four hopes on the rocks, while a likely season-ending injury for Braidon Burns and another Sam Burgess blow rounded out a horror night for South Sydney.

Burns cast in dejected figures at ANZ Stadium sheds as resurgent Bulldogs surged to a 14-6 upset, the luckless young center re-injuring the same hamstring that earlier this year sidelined him for three months.

While Burns will undergo obligatory scans and assessment in the coming days, his on-field reaction and lengthy initial lay-off make for a grim prognosis, coach Wayne Bennett conceding "it's probably his season [over]. It's the third time he's done it. "

So too the sight of skipper Sam Burgess, who sat out last week with a quad strain, pulling up lame late in the contest as Canterbury kicked on.

"It doesn't look great," said Bennett of Burgess, who will likely be racing the clock in a six-day turnaround for next week's grudge match with former coach Anthony Seibold and the Broncos.

Kieran Foran, meanwhile, knows all too well what Burns is facing.

But having finally put his own calf and hamstring issues to bed the big-money half-tormented Souths with the intentions of his salad days at Manly.

Foran's work on the line spent game-breaking, laying on two tries for Corey Harawira-Naera as Canterbury made it three straight – the first time they've done it in Dean Pay's tenure at Belmore.

For the Rabbitohs, though, the loss drops them out of the top four for the first time this season, at the worst possible time.

Manly's big win over the Wests Tigers sees them skip ahead to fourth place with just three regular season games remaining, an all-important second bite of the semi-finals cherry evaporating if Souths can't reclaim the ascendancy.

Throughout a tense first half Canterbury well and truly held it, making the most of running without reward.

Only penalty goals traded by Adam Reynolds and Nick Meaney troubled the scorers before half-time.

It was Meaney who looked most likely down the Bulldogs' left edge, Dane Gagai once shunting him into touch as the tryline loomed and again batting a ball dead with the blue-and-white flyer in hot pursuit.

Another Reynolds penalty goal inched the Rabbitohs ahead after the break, but Foran ensured their advantage lasted all of 60 seconds.

His feathered grubber into the in-goal gave Harawira-Naerea the first tryscorer honors in the 47th minute.

Reynolds leveled the scores again soon after with his third penalty goal of the night.

Once more, though, it was Foran putting it on a platter in retaliation, piloting Harawira-Naere through from a short range for a 12-6 lead.

Canterbury looked likely as the game wore on, Raymond Faitala-Mariner and Dallin Watene-Zelezniak finding space through the middle as Lachlan Lewis and Foran guided them around the paddock.

With the wind winding down Southeast winds up by pushing for points through James Roberts and Gagai.

A strip on Gagai as he looked to burrow over the line gave the Souths a full set in prime real estate, only for Liam Knight to cough up possession one tackle later.

When Will Hopoate shot downfield soon after, Sam Burgess was snipered with a leg injury that would have Souths sweating throughout the week.

So too their worrying form slump that has now seen them lose three on the trot and fall to the fifth on the ladder, Brisbane having won six of their last seven in return.

And for Canterbury, the chance to rattle another top-eight team cage, but no doubt the sweetest yet if they can upset old Parramatta foes on Thursday.