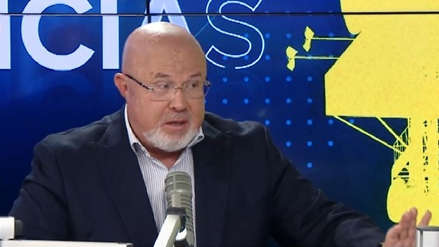 congressman Carlos Bruce said on Saturday that he had decided on July 28 to give up Peruvian Cambio Bench (PpK)This is after the announcement of President Martin Viscara of a constitutional reform to advance elections by 2020 through a referendum.

in Approach on SaturdayBruce said it was "terrible that a country" did not meet the constitutional deadlines of the presidential and congressional periods. In this sense, Parliament questioned Martin Viskara that he had assumed the presidency of the republic if he considered that these conditions should not apply.

"I made that decision on July 28th when he saw the president (Martin Viscara) say that the elections must be advanced, so the Constitution should be changed, "the legislator said.

Carlos Bruce has revealed that the decision to split from the ruling party was announced to several "congressmen" by PpK. They recommended that you wait a few weeks until you seek a dialogue with the Head of State. However, he said, his colleagues' efforts "failed."

"We saw during this period gestures of displacement to the First Vice President … leaving her without saying goodbye on July 28, who was not informed of the things to be announced that the President of the Republic was beginning to address the issue of Baguazo, a kind of aggression towards the vice president How much more can you go on? It was obvious that there was an act of hostility from the executive to his congressman "– he said.

A bank in danger?

Carlos Bruce said that The head of state is not interested in the official bench So he rules without it. In addition, the congressman said that the cabinet also did not participate in the discussions and was informed of the things the president would do.

"What do we have right now? the president rules with two or three people, this is very dangerous. The bench was unaware of the proposal (pre-election), the first vice president (Mercedes Aráoz) was clear in the images, everyone stopped clapping and she sat down because she was not informed, "he said.

The official expander warned that The PpK bench may disappear at any time and dismissed statements by Cabinet chief Salvador del Solar for trying to plot against the government.

"The PM talks badly about Jesenia Ponce, she upset her resignation today, the bench disappears today (…) that's why I suggest the Prime Minister apologize to Jesenny Ponchand because it is currently leaking from the bench, "he said.

Spain: Find a protein that slows down aging