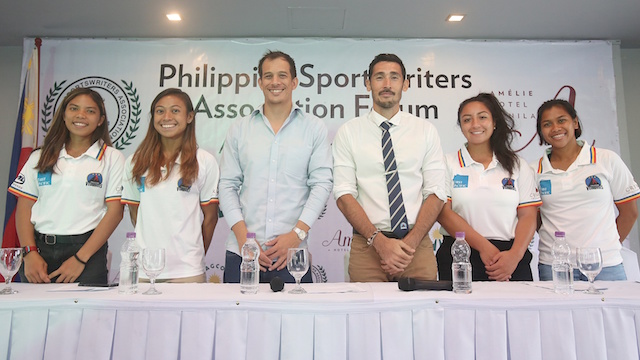 "This year we are looking to replicate this performance and take it one step further," says women's coach Chris Everingham

MANILA, Philippines – The Philippines' women's rugby team of 7 does not plan to settle for less than a gold medal in the 2019 Asia Rugby Seasonal Trophy from August 10 to 11 in Jakarta.

"In 2018 our girls played very good rugby 7ths. This year we are looking to repeat this performance and go one step further," women's trainer Chris Everingham said on Tuesday, August 6, in the weekly forum of the Association of the Sports Writers of the Philippines at the Amelie Hotel.

The Philippines take second place in the tournament and gather in Pool A with Guam, Indonesia, Brunei and Chinese Taipei. In Pool B are the top seeds of South Korea, India, Laos, Bangladesh and Qatar.

The 25-player national training pool has been trying to select the final 12 women's team for the mini-training camp organized over the last two weekends.

According to the manager of the Philippine Rugby Football Union (PFRU) Jake Lets, the team that is included in the Trophy series consists of 8 players at home and 4 players abroad.

Let's add that this competition is part of the buildup of the Southeast Asian Games in the Philippines in 2019.

"Whatever we do is aimed at the SEA Games," said Everingham of the squad, which will try to surpass the bronze medal in 2015 in Singapore.

The Philippines will host the Rugby 7s 2019 SEA Games on December 7-8 at Clark Parade Square. – Rappler.com

Take the discussions to the next level with Rappler PLUS – your platform for deeper understanding, closer collaboration and meaningful action.

Sign up today and get exclusive content, events and seminars tailored specifically for those who yearn for clarity and collaboration in an action-oriented smart community.

You can also maintain Rappler without PLUS membership. Help us stay free and independent by making a donation: https://www.rappler.com/crowdfunding. Every contribution is important.