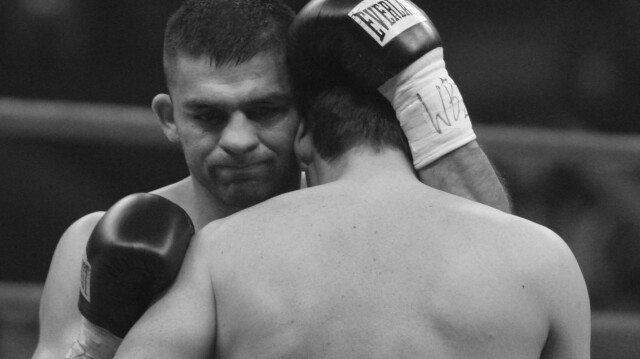 “If David Kostecki was attacked at night, then one of the men could have sat on him, preventing him from moving and holding his hands by his arm and arm. (…) The other person at this time can tighten the loop of the leaf and make it suffocate, ”said the attorney for the family of the deceased boxer, lawyer Jacek Dubois, to TVN24. He said "analysis of the tracks shows that this is possible."

On August 2, boxer David Kostecki's body was discovered in the cell of the Warsaw Maintenance Center in Byalok. He had to hang on the contour of the sheet, lying in bed under the blanket.

Gazeta Wyborcza, which reached the official note of Prosecutor Wojciech Kapuszki about the discovery of the boxer's body, says "there are doubts about the suicide." It is about finding two small marks on the body of the deceased, who, according to the prosecutor, "look like needle-stick marks".

The Warsaw-Prague District Prosecutor's Office responded to these reports.

"They are (two clues – ed.) Only old-fashioned scabies that are not related to the death of the deceased," the prosecutor wrote in a statement Monday. The Justice Department also said in a press release that "the autopsy of the man, ordered by the prosecution, precludes the involvement of third parties, confirming that David Kostecki committed suicide."

Talking to TVN24 about the possible circumstances of Kostecki's death, said the representative of the boxer's family, lawyer Jacek Dubois.

– We were able to find out that contrary to what the prosecution said, there were a number of traces in the body of the deceased showing the battle before the death and the involvement of third parties in his death. These are abrasions and hematomas. The hematomas are, among other things, on the right shoulder, on the arm, on the back, there are scrapes on the leg – he listed.

As he put it, "analyzing these footprints with doctors and forensics allows us to speculate how death may have taken place." "If David Kostecki was attacked at night, then one of the men could have sat on him, preventing him from moving and holding his hands by hand and hand to prevent defense," he said. He added that these were "typical places where fogs develop hematomas and skin lesions." He also stated that "a second person at this time can tighten the outline of the leaf and suffocate."

"I can't say it was, but the analysis of the tracks shows that it was possible"

"I can't say it was, but the analysis of the tracks shows that there was such an opportunity," he added.

Dubois also referred to the study through expert assessments found on the ex-boxer's body.

The lawyer also stated that "it is the obligation of the autopsy doctors to indicate the mechanism (formation – editing) of these traces as they have arisen". – These are mechanical injuries that must have occurred as a result of some type of injury, pressure, events of this type. The section does not respond at all, does not explain. It's just that it has nothing to do with death, ”he said.

Giertych: We approached the prosecutor's office with a number of requests

In turn, on Wednesday, the second of the family's representatives, lawyer Roman Girtih, on Twitter, briefed on the steps taken on the matter.

"We have asked the prosecutor's office with a number of applications, including a request for expert review, to see if hanging up the bed, as alleged by David Kostecki, is possible without the involvement of third parties. I ask in public: when will this request be considered?"

We approached the prosecutor's office with a number of requests, including an application for examination by experts, whether the suspension of the bed in a manner allegedly done by David Kostecki was possible without the involvement of third parties. I ask publicly: when will this application be considered?

Deputies want to convene a commission after Kostecki's death

On Tuesday, members of the PO-KO Club asked Zbigniew Zibro, Attorney General and Minister of Justice, about the circumstances of David Kostecki's death and requested an urgent meeting of the Justice Committee on the matter.

According to them, there are serious indications that there was a murder of a witness in the Podkarpacie moral scandal. In the past, Kostecki had to disclose information about links between local staff from the Central Bureau of Investigation and the owners of an escort agency.

Also Tuesday, tvn24.pl described the story of Maciej M., a man serving a sentence in Rzeszów Prison. Just like Kostecki, he had to testify before a Warsaw court in the trial of Tomasz G., accused of robbery several years ago.

M. was admitted to a psychiatric hospital after a suicide attempt, he claimed. The man claims he was beaten earlier by prison officials. SW spokesman Lt. Col. Elżbieta Krakowska said that "during his time in prison, the convicted Maciej M. had never been beaten or engaged in any fighting. He carried out demonstrative acts of self-aggression."

She informed that "on August 9, 2019, Maciej M. in a room for many people in the Rzeszow prison in front of his prisoners, at midday around 2 pm, tried to put on his neck a hairdo made of shoes."

On Wednesday, deputies from the Platforma Obywatelska-Civic Coalition announced they would file a request for protection for Maciej M., whom they identified as "possibly a key witness in the Podkarpackie scandal".

– Let me remind you that we are dealing with the third death related to the subcarpathian scandal. With three witnesses who could tell what really happened in connection with the Podkarpackie scandal and who was involved in it and whether former Sejm marshal Marek Kuczczynski was involved in it, she said.