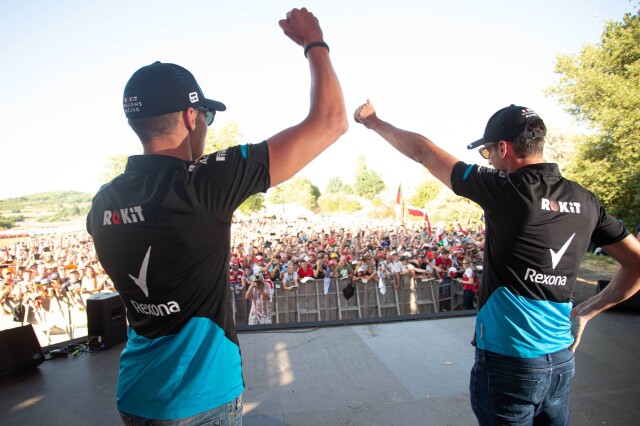 Kubica won the first point of the season in the last German Grand Prix. Russell remains the only F1 player to have made this game yet. Williams' drivers are at the end of the overall classification. They can't afford it anymore because of the very low capacity of the cars they drive.

He picked up the microphone and sang

Due to poor results, the mood in Williams is certainly not the best. However, this does not adversely affect the relationship between an experienced Pole and a young Briton.

There was a very enjoyable event during Thursday's meeting of fans with fans near the Hungaroring track. Well, at one point Russell picked up the microphone and started chanting his teammate's name.

"Robert Kubica, Robert Kubica!" – intoned and repeated several times. The Polish driver had to be very nice. With a smile, he greeted the fans chanting with Russell.

"Someone had to do it," jokes a British player on Twitter. You can see that the leaders live in harmony.

"Has talent and great knowledge"

Russell always spoke respectfully of Kubica. The Pole does not pay him debt. In an interview, he expressed his approval for the 21-year-old's talent.

– Undoubtedly, he is fast-paced for his age, has talent and great knowledge. I think there is everything necessary to have results. He misses the most important thing: the car, ”the Pole said.

Sunday's Hungaroring competition is the latest before the summer break of this season's F1. The next one will be held on September 1st in Belgium.