Marek Chrzanowski after his resignation at PFSA. Sellin: we will explain it 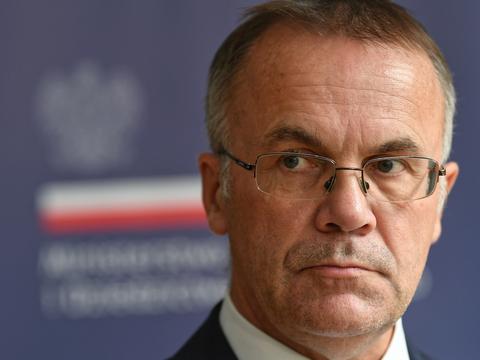 Today, Jarosław Sellin when asked on TVN24 is it good that Chrzanowski was in his cabinet after resigning for two hours, saying that this issue would be clarified. – Maybe it will also explain why he sat there, but that will be explained. I guarantee it will happen – he said in "Kropka nad i".

KNF spokesman Jacek Barszczewski informed that Chrzanowski was at the KNF headquarters today to give him an act of dismissing him from a function signed by the prime minister. Barszczewski pointed out that the former head of the KNF no longer had access to KNF resources, including documents.

This afternoon, Piotr Kaczorek from the Central Anti-Corruption Bureau confirmed that CBA agents entered the KNF office and secured evidence. The prosecutor's office entrusted the Central Anti-Corruption Bureau by conducting an investigation that had already begun regarding the neglect of power or failure to carry out tasks by the head of the KNF.

At night on TVN24, Jarosław Sellin assured that the country would "face such a scandal". – People who are responsible, if they have something sinful, will be responsible for that, different from what we had before 2015 – he said. He considered that the state's actions on this issue were immediately offended by the PFSA.

KNF scandal. Billionaire accused the head of the KNF of corruption proposals

"Gazeta Wyborcza" wrote yesterday that, according to Leszek Czarnecki, owner of Getin Noble Bank, Chrzanowski, then head of the Financial Oversight Authority, in March 2018 he offered assistance to this bank in return for around PLN 40 million. Czarnecki noted this offer and told the prosecutor's office about the suspicion of committing a crime by the head of the KNF. The same was reported in the Financial Times, which, however, wrote "only" by PLN 13.6 million. These are differences that result from interpretations that differ from the level of company capitalization.

See too: Did the KNF chairman request from Leszek Czarnecki 40 or 13.6 million for "pushing" his bank?

Yesterday in the afternoon, Chrzanowski announced that he was resigning from the post of chairman of the Polish Financial Supervision Authority. Prime Minister Mateusz Morawiecki accepted the dismissal. In the evening, the head of government met with Minister of Justice, Public Prosecutor Zbigniew Ziobro and Head of Service – Coordinating Minister for Special Affairs Mariusz Kamiński, National Prosecutor Bogdan Święczkowski, CBA head Ernest Bejda and deputy head ABW Norbert Loba.

A government spokesman, Joanna Kopcińska, announced that talks regarding the current activities of the record service with the participation of the former head of the KNF, Marek Chrzanowski; The prime minister requires agencies to work together to immediately clarify this issue. Previously, the Public Prosecutor told him he had ordered an investigation into the suspicion of committing a crime by the head of the KNF.

Read more: Ziobro about the KNF scandal: the state operates by model