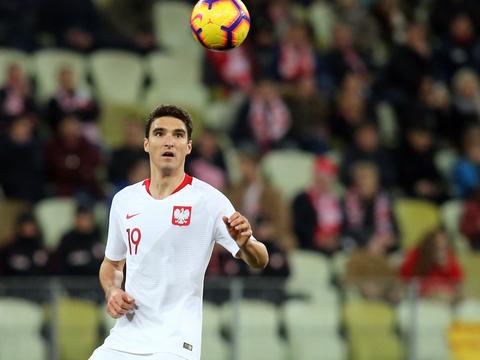 Jan Bednarek and Marcin Kamiński as the stoppers duo failed the test and Brzęczek still had to check the center back. At one point in the match against the Czechs, Robert Lewandowski was annoyed when playing defensor because they had problems managing themselves and giving them encouragement to the guests.

There is no foundation

To be sure, Brzęczek will try Artur Jędrzejczyk in this position, if not for injury. The coach acknowledged that his watch also included Under-21 teammates Paweł Bochniewicz and Mateusz Wieteska, he mentioned Krystian Bielik, and Sebastian Walukiewicz from Pogoń Szczecin. The training staff were also interested in Maciej Wilusz and Bartosz Salamon, but for now they have not convinced the trainers to call them. The coach must therefore breathe and blow Kamil Glik and pray that the wound will not hurt him. At the beginning of the work on the Brzęczka concept, the idea emerged that in the middle of the defense, in addition to experienced players from Ligue 1, set up Łukasz Piszczek, but the person who was interested dropped him from his head during the resignation from national color play. The coach does not defend himself against the idea of ​​turning Grzegorz Krychowiak out of the defensive midfield position in defense, and maybe he will try the castle like that someday.

It is sad that we have not been able to increase the success of AS Monaco players so far, and their radical loss greatly affects team performance. If it thinks back to a not too distant time, it was the most persistent defense in the white and red team when Jacek Bąk, Tomasz Wałdoch or Michał Żewłakow played in it. They not only provide calm behind, but as their personality affects the entire band.

True, Brzęczek noted that defensively, which two years ago was our pride at EURO 2016 (two goals missing in five matches), was destroyed. Łukasz Piszczek ended his professional career, Michał Pazdan had a problem at Legia and he did not play, and Kamil Glik and Artur Jędrzejczyk treated the injury. And just as a house is built from a foundation, in our representation the combination of defenses is hampered by conditions. The coach called Bednarkek about his situation at the club, because young players were present at the national team for now, rather than at Southampton. Maybe in winter he will go on loan, it will benefit the team if the situation at the club does not improve.

We also had problems with the left defense, but Brzęczka's predecessors had to face it. Right-leaning Bartosz Bereszyński played against the Czechs and it was clear that he was hard to find. The coach cannot check Maciej Rybus (he has just healed an injury), while Arkadiusz Reca meets with the Atalanta meeting from the side.

However, there are many more problems. When the dust of the battle falls after the World Cup, it turns out the king is naked. The national team needs to be reconstructed, but the candidates to replace the leaders have not been seen. And this is also the curse of this staff, that there is a lack of fresh blood. There is no player in direct support, namely the Under-21 team, sending a signal that he will be ready to jump to the first team soon. Those who have the right to believe that they will attract the game, for some reason they are not on the team or do not meet expectations. Bartosz Kapustka, who managed to appear at EURO 2016, now plays on the youth team. Karol Linetty, in Brzęczka's opinion, did not deserve the appointment for a meeting with the Czech Republic and Portugal, Bednarek sat in the stands at the club, and Piotr Zieliński failed to play the white-red match in Gdańsk.

No longer with reality charm

Kadrowicze during the Brz pertandinganczka period did not win one of five matches and they might be nervous. The trainer has learned about diseases that affect voters, namely lack of time, and trying to find them. He admitted that this was what surprised him most when working with the national team. In addition, while Adam Nawałka was at the start of his first successful elimination for him based on players who regularly played at the club, Brzęczek did not have such comfort.

There are many indications that after Tuesday's meeting with Portugal we will not have a better face than after losing to the Czech Republic, and so the team will end this bleak year, marked by an unsuccessful start at the World Cup and in the League of Nations. Most likely, anger will focus on Brzęczek, and almost no one will think of a deeper analysis: what are our players?

During Nawałka's tenure, we built castles, but even though we decided proudly during the French championship, they turned out to be buildings on sand. There is no stone if it falls in your hand. The fact is that one day the mantra ends and that's where our representation is at this stage. It's time to go back to the queue. We are heading in the direction we have lived in the past with young people in recent years.