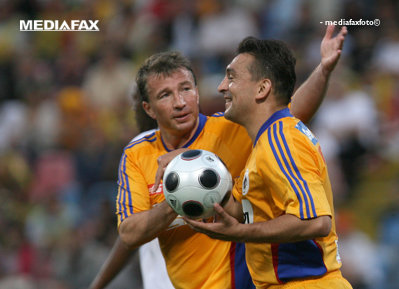 Dan Petrescu (50) works wonders at CFR Cluj after qualifying with the Romanian Champion in the Champions League playoffs at the end of a double crazy win against the Celtic Scots, 5-4 overall. Bursucul is in high demand after he revealed he had an offer to leave, and Ilie Dumitrescu revealed a proposal that Petrescu had in the past from the Premier League, which he declined.

Petrescu may be the Crystal Palace coach after the London club came up with a proposal on his behalf in 2013. At the time, SuperDan rejected Britain's offer to go to the Premier League to train because of the high salary he had at the club where he was signed at the time. In 2013, Dan Petrescu was the coach of the Russians in Dynamo Moscow.

Crystal Palace was in a difficult position at the time, with only four points in 11 stages coming in last. Petrescu did not want to be associated with the loss of the London team. "Dan Petrescu had an offer from Crystal Palace. He told me." This is your chance, why not consider it? "He refused, he had a very good salary at the club he was in at the time. Unfortunately, it's difficult to get into that circuit and get to the Premier League workouts."said DigiSport's Ilie Dumitrescu.

As soon as he qualified for the Champions League playoff, Dan Petrescu revealed that he could leave CFR just before returning with Celtic, which won 4-3 at Celtic Park. Bursukul admitted on his return to Romania that he was refusing an offer from abroad to participate with CFR in European Cups. The Gruia Group has tickets for the Europa League groups but aims higher and plays for joining the Champions League groups with the Czechs from Slavia Prague.