Interview with the brightest participant in the Europe-Asia Marathon, who ran the distance in a diaper. Yekaterinburg, August 12, 2019 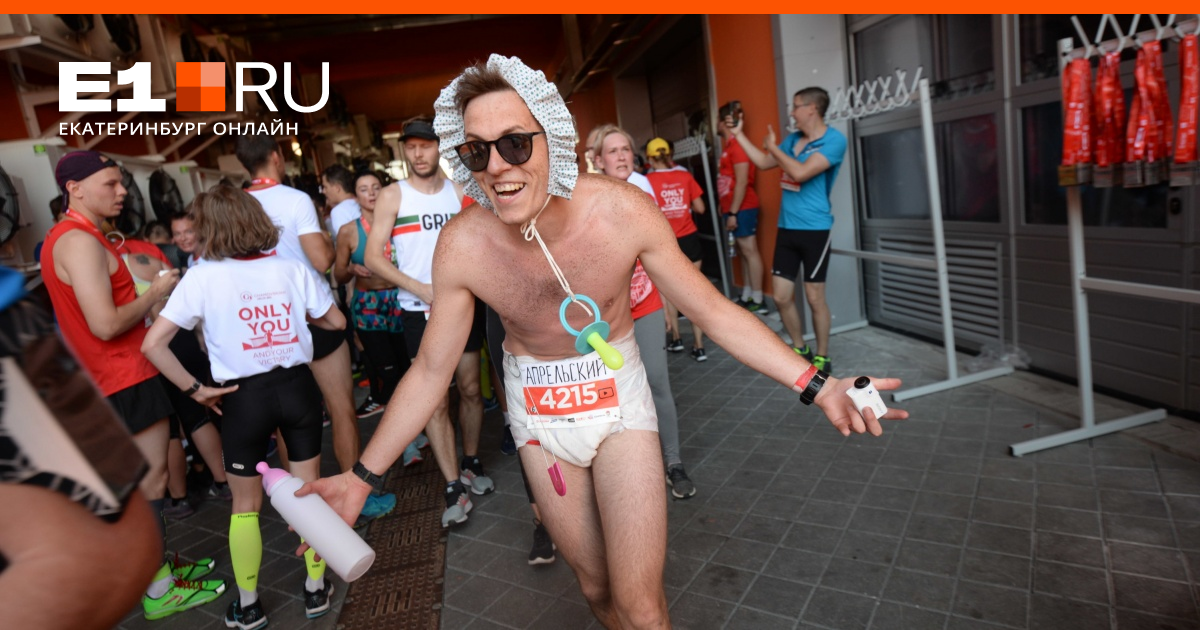 On Sunday, August 11, the fifth Europe – Asia Marathon took place in Yekaterinburg. You can usually find a lot of image runners on it, but this year they hardly existed.

The participant who started at the start in the hood and diapers looked even more noticeable. E1.RU found the "running kid" and asked him about the image and the marathon.

The brightest participant in this year's marathon is Andrei Aprilsky and he is from St. Petersburg. Together with his friend, he ran a 21km half marathon, managing it in about two hours.

After the finale, we called Andrew and asked him some questions.

– Is this your first run in the Europe-Asia Marathon?

– I heard a lot about Europe – Asia, I decided to take a chance. Besides, I have a friend here, I needed to run it at the half marathon. That's how the stars came together.

– There are a lot of pictures from other marathons on your Instagram page, but you haven't posted any images. Why now?

– Running purely on the score is no longer very interesting. Because Chechnya and the others are just no longer up to date. It just needs a little introduction here. I'm not running on the score. I run for the road, for the positive, so that people like it so that they have fun. Because when you walk a distance and think, "Here, another kilometer …" – this is one thing, and when such a person walks past you and even encourages you – it provokes a smile and, at maximum, a desire to run forward.

– The idea came up spontaneously on Friday at the tea table already in Ekaterinburg. They sat down with their fellow athletes and began to discuss what to do in the heat. 24 degrees minimum promised. Therefore, it was necessary to undress as much as possible, to catch the Ural sun, to warm up a little and to hide its head from the soaring rays.

– How long did they make the suit?

– The girl sewed a lid for me, the diaper is easy to find, just like a big model. In a homerid size, the baby feeding bottle was filled with isotonics (a drink that maintains an optimal balance of fluids and electrolytes in the body – ie. Ed.) and rushed.

"And how do you feel about running in diapers?"

– There are some nuances. He rubs his legs, for example. You can't run faster than the rhythm you set. Besides, I was running with a friend and I couldn't get along with the guy because it was very important to him.

– We escaped with friends and our support was in the face of my friend and nephew. They stood with the flag, they fell ill, they helped. In the running process, the boys and I encouraged other athletes because they really lacked the support of distance citizens. I hope the people of Ekaterinburg liked it. Anyway, we stopped, took pictures, there was some activity on the highway.

– What about the marathon itself?

– Quite a few motorists fly stones in the garden, but first, it's Sunday, and second, in the morning. It has to be a little different. Europe – Asia is a true event tourism. Not only residents of Yekaterinburg, but also representatives from other cities and other countries are fleeing it.

Your former mayor, Eugene Roisman, always works with you everywhere, he outlined the vector of the races themselves very well, and that needs to evolve.

"Will you come to run to Ekaterinburg?"

"Maybe, but not in the baby's suit." Perhaps some other performance will mature. It is necessary to diversify competitions for athletes, otherwise they usually run with serious faces, overcoming their distances. And so you run, you smile, you give 'fives', you communicate with the athletes themselves, you scream, you cheer them on, because it is very difficult for someone.

– Running a marathon in such heat is very difficult. The same Chechun finished with all his might. It was a very difficult race and overall time.

– Is there anything to advise the organizers?

– Your marathon is quite young, it lacks desire. It requires a boost and some kind of visual component. So, from a participant's perspective, many things are missing. Bottled water should be either in glasses. You run five kilometers and have 10 and 15 liter water tanks, grab and drink from your palms. This is not exactly the level I would like to see. Plus I would add isotonic at some last distances.

For example, you have a movement up the Metallurgists, it's a pretty serious climb. Especially for those who are just starting to run. The nuances need to be adjusted and constructive criticism heard. I understand everything perfectly, the marathon is quite young, fifth, anniversary. But it requires promotion and if it is organized very nicely and competently, then the sports audience itself will catch up. I think everything is ahead. Success and prosperity of the marathon.

– This is not the first time in Ekaterinburg. What about the city itself?

– Mundial has transformed the city, the city is developing, but I would like some faster and more eventful things. In music you have it again "Europe – Asia". What is shaking and what people will come here for in pieces.

Also, during a talk about organizing a marathon, Andrew mentioned the gigantic lines behind the marathon starter packs. E1.RU commented on this situation by the director of the marathon Andrey Utkin, his answer can be found here.

And the impressions of other marathon participants read in this material.