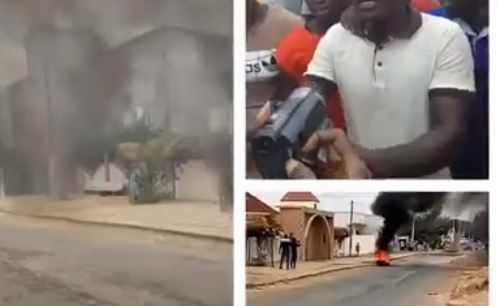 An unpublished event took place in Fatik. Tires were burned in front of the young president's house Fatickois to express their dissatisfaction after promises by Sports Minister Matar Ba.

The young people of Fatik are very opposed to their mayor. According to Senene, Matar has promised them to come to Fatik with the Lion's finalists from Can 2019 in Egypt. To their surprise, Ba Ba was only accompanied by his friends and his surroundings. They also took the opportunity to condemn the extreme stubble in the region.

The heir to the former Mayor of Fatik is Matar B. The Minister of Sport replaces Mackie Sal, who became President of the Republic of Senegal. Do not forget that Matar is the leader of the Alliance for the Republic (April, Party of Power). During this ceremony, Mattar Bi would receive 37 votes against 8 of his opponent, Isiard Dieng, another member of the same party. Two councilors voted by proxy from the fifty councilors that make up Fatik City Hall 45 attended the vote held on Wednesday, May 16, 2012, under the supervision of the Fatique Prefect.

Matar Ba, the sports minister, said his future with this place he runs from 2012 remains suspended by the decision of the head of state, Fatik's natural leader, that he has replaced the mayoralty.

"I do not have an opponent in Fatik. President Mackay Sal is the natural leader of Fatik. In 2014, I resumed my candidacy for mayor of this area because the president of the Republic asked me. I am on a mission and if he asks me to continue tomorrow, I will do it without hesitation. "She said Matar Ba on the headquarters.