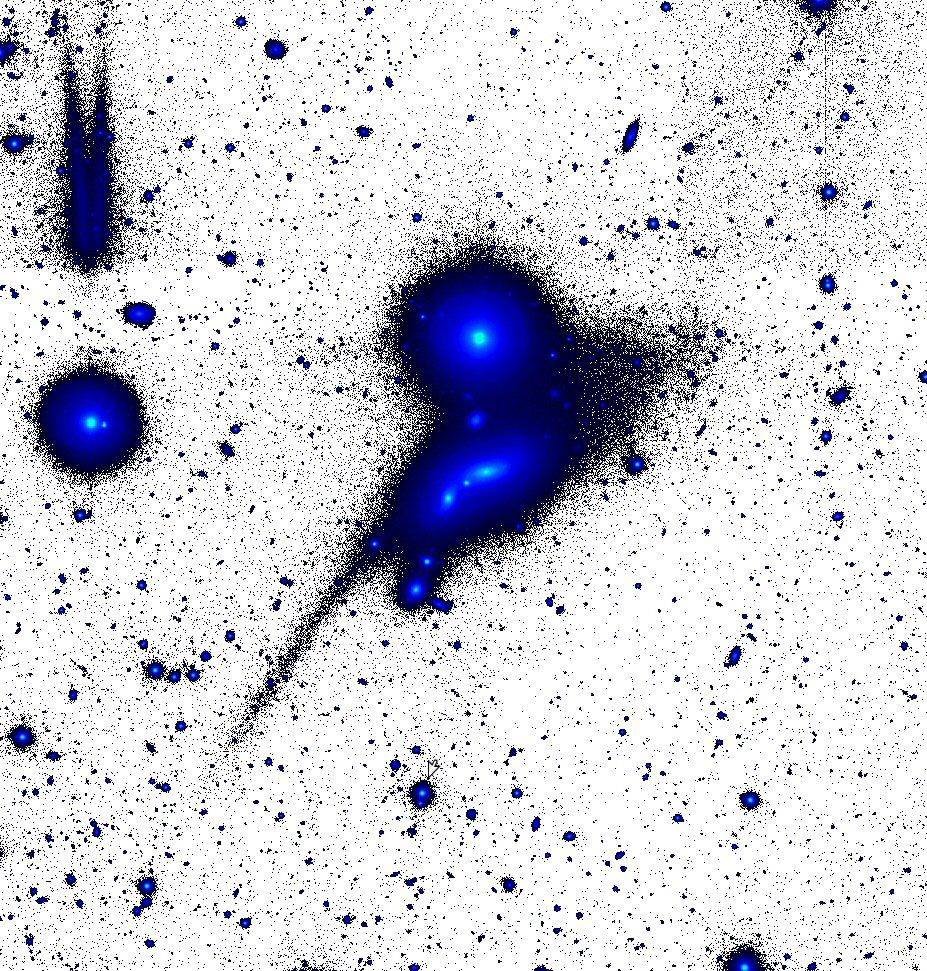 A team of astronomers from Israel, the US and Russia have identified disturbed galaxies resembling giant tadpoles, complete with elliptical heads and long, straight tails, around 300 million light years from Earth. Galaxies are a million light years long from end to end, ten times larger than the Milky Way. This research was published today in the journal Royal Astronomical Society Monthly Notice.

"We have discovered giant, extraordinary relics of disturbed galaxies," said Dr. Noah Brosch, from The Florence and George Wise Observatory at Tel Aviv University's School of Physics and Astronomy, who led the research for this study.

When galaxies are disrupted and disappear, their stars are inserted into larger galaxies or thrown into intergalactic space. "What makes this object extraordinary is that the tail alone is almost 500,000 light years away," said Prof. R. Michael Rich of the University of California, Los Angeles. "If it is in the distance of the Andromeda galaxy, which is about 2.5 million light years from Earth, it will reach one fifth of the way to our Milky Way."

Drs Brosch and Kaya collaborated in this study with Dr. Alexandr Mosenkov from St. University Petersburg and Dr. Shuki Koriski from Florence and George Wise Observatory as well as the TAU School of Physics and Astronomy.

According to research, giant "tadpoles" are produced by the disturbance of previously invisible small dwarf galaxies, which are mostly composed of stars. When the gravitational forces of two galaxies are seen attracting stars in these vulnerable galaxies, stars closer to the pair form a tadpole "head". The remaining stars in the victim's galaxy form a "tail."

"Extragalactic tadpoles contain a system of two normal galactic discs which are very close, about 40,000 light years away," said Dr. Brosch. "Together with other galaxies nearby, galaxies form compact groups." Galaxies are part of a small group of galaxies called HCG098 which will merge into one galaxy in the next billions of years.

Such small galaxy groups were first identified in 1982 by astronomer Paul Hickson, who published a catalog of 100 such groups. The Hickson Compact Groups examine environments with high galaxy densities that are not the core of galaxy "clusters" (clusters containing thousands of galaxies themselves). The "Tadpole Galaxy" is listed as No. 98 in the Hickson Compact Group catalog.

"In a compact group environment, we believe we can study the example of 'clean & # 39; from the interactions of galaxies, study how matter is transferred between members, and how the material just generated can modify and influence the growth and development of galaxies, "said Dr. Brosch.

For research, scientists collected dozens of target images, each of which was exposed through a wide filter that chose a red light, while almost eliminating foreign light pollution. "We use a relatively small 70 cm telescope at the Wise Observatory and the same telescope in California, both of which are equipped with sophisticated CCD cameras," said Dr. Brosch. The two telescopes are working together on a project called the Halos Survey and the Surrounding Environment of Galaxies (HERON).

The new study is part of a long-term project in Florence and TAU's George Wise Observatory, which explores the sky at low light levels to detect the smallest details of the galaxies studied.